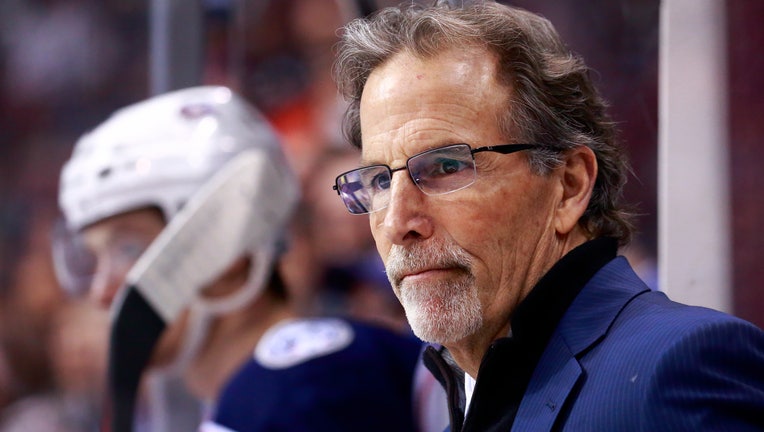 VANCOUVER, BC - MARCH 24: Head coach John Tortorella of the Columbus Blue Jackets looks on from the bench during their NHL game against the Vancouver Canucks at Rogers Arena March 24, 2019 in Vancouver, British Columbia, Canada. (Photo by Jeff Vinnic

PHILADELPHIA - The Philadelphia Flyers have hired John Tortorella as their new coach, hoping the fiery veteran can help lead them to their first Stanley Cup championship since 1975.

The Flyers made the official announcement on Friday morning after rumors surfaced on Thursday.

Tortorella, who turns 64 next week, coached Tampa Bay to a Stanley Cup title in 2004, and he also coached the New York Rangers and Vancouver Canucks. He was fired in May 2021 after six seasons with the Columbus Blue Jackets.

Tortorella is the sixth Flyers coach in the last 10 years and he will triy to revitalize a dormant franchise that has just one playoff series victory since 2012. The Flyers finished with a 25-46-11 record this season under Alain Vigneault and Mike Yeo and were last in the Metropolitan Division.

Tortorella is the second-winningest American-born coach in NHL history. He is known for his occasional temper and demanding, no-nonsense coaching style, and he has clashed through the years with his share of players.

"I am very happy to bring in John to be the next head coach and voice behind the bench of the Flyers," said team President of Hockey Operations & General Manager Chuck Fletcher. "John demands the best out of his players every single game. He is a Stanley Cup Champion and has a lengthy track record of both regular season and playoff success. During the interview process we discussed a number of factors that are crucial to bring this team immediate success and it became clear to me that his vision and style makes him the right person to restore a winning environment to our locker room."

The Flyers have pinned their hopes on Travis Konecny, Joel Farabee, Travis Sanheim and goalie Carter Hart as key pieces of the future. The Flyers last played in the Stanley Cup Final in 2010 and haven’t won a championship since consecutive Stanley Cups in 1974 and 1975.

Tortorella is 673-541-37-132 over almost 20 seasons and emerged as the new coach out of a slew of candidates that included former Washington and Islanders coach Barry Trotz. Tortorella is only 56-64 in the playoffs with six first-round exits.

"I am very excited to be joining such a historic and well-respected franchise like the Philadelphia Flyers. From my very first conversation with Chuck, I knew this was the right fit for me and I believe in the direction this team is heading," Tortorella said.  "Having faced the Flyers for several years, I know firsthand how tough of a city Philly is to play in and I look forward to being on the right side of the bench on opening night in front of such a loyal and passionate crowd of Flyers fans."