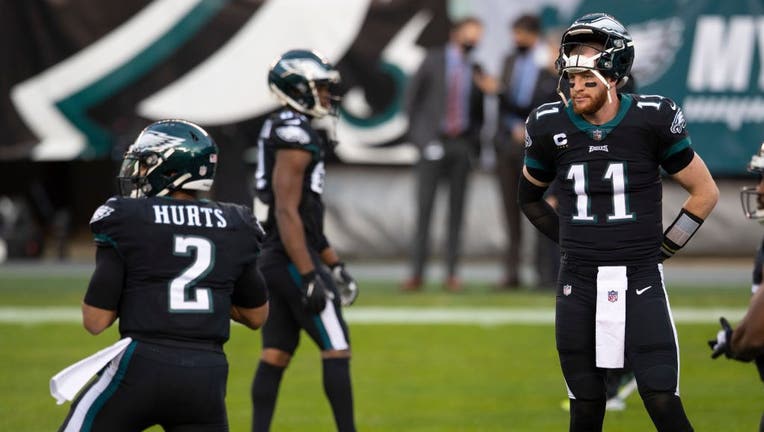 Carson Wentz #11 of the Philadelphia Eagles looks on as Jalen Hurts #2 warms up prior to the game against the New Orleans Saints at Lincoln Financial Field on December 13, 2020 in Philadelphia, Pennsylvania. (Photo by Mitchell Leff/Getty Images)

PHILADELPHIA - Carson Wentz needs time away to think about his future with the Philadelphia Eagles and is hopeful it won’t end in a divorce, a person familiar with the situation told The Associated Press on Tuesday.

Wentz was benched for the final four games of the worst season of his five-year career and was inactive Sunday in a loss to Washington. He hasn’t spoken to reporters since Dec. 6.

Wentz also hasn’t discussed his future with team officials yet, according to the person who spoke to the AP on condition of anonymity because it’s a private matter. The person said those conversations will take place when the time is right.

Wentz’s relationship with the organization is strained, according to another person close to the situation. It’ll take both sides coming together to make it work.

"We are talking about a guy that’s immensely talented, has a great work ethic and doing whatever we can to put him in the best possible situation to be successful," Roseman said.

After Jalen Hurts replaced him as the starter, Wentz said: "Obviously, that’s frustrating as a competitor and just the personality that I have, I want to be the guy out there."

Though he hasn't said anything publicly since those postgame comments, it’s obvious Wentz wants to play.

"No one wants to be a backup anything in this league. I do not wanna be a backup tight end. Carson Wentz doesn’t want to be a backup quarterback," said Zach Ertz, one of Wentz’s closest friends on the team. "I haven’t spoken with him (about) what his plan is for the future."

If Wentz decides to ask for a trade, the Eagles should have several interested suitors. A reunion with Frank Reich in Indianapolis would be an ideal scenario. Wentz thrived under Reich, who was Philadelphia’s offensive coordinator in 2016-17. The Colts went 11-5 with Philip Rivers and are in the playoffs. But the 39-year-old Rivers isn’t under contract for next season.

The Eagles would absorb a significant cap hit of $33.8 million in dead money on the 2021 cap if they trade Wentz before March 19. That number increases to $43.8 million if Wentz is traded after that date because he’s due a $10 million roster bonus by the third day of the new league year. The higher figure in dead money could be split over two years — $19.3 million in 2021 and $24.5 million in 2022 — if Wentz is dealt after June 1.

It’s possible Wentz’s agents could work with Philadelphia and a potential new team to alleviate some of the cap hit.

Of course, the Eagles don’t have to accommodate a trade request. Hurts showed potential in four starts but not enough to prove he’s a franchise quarterback yet.

The Eagles traded up twice in the 2016 NFL draft to select Wentz with the No. 2 overall pick. He started all 16 games as a rookie and finished third in NFL MVP voting in 2017. But Wentz tore two knee ligaments in Week 14 that season and watched Nick Foles lead the Eagles to the franchise’s first Super Bowl title.

A back injury ended Wentz’s season early in 2018 and Foles led the Eagles to a playoff victory.

Wentz started every game in 2019 and helped the Eagles win the NFC East with an excellent four-game stretch in December. He became the first QB in NFL history to throw for 4,000 yards without a wide receiver having 500 yards receiving and became the first QB to throw 20 or more touchdowns and seven or fewer interceptions in three straight seasons.

But he was knocked out of his first career playoff start after nine snaps because of a concussion. Wentz hasn’t been the same since that hit from Jadeveon Clowney. He posted a 72.8 passer rating, 16 interceptions and lost four fumbles in 12 starts in 2020. The Eagles finished 4-11-1.

A fresh start with a new team could help Wentz rejuvenate his career but a breakup won’t occur until attempts at a reconciliation are exhausted.