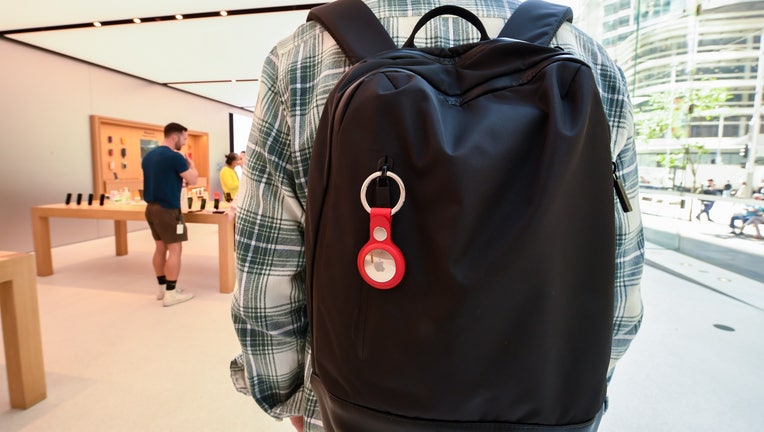 A key ring containing an AirTag attached to a backpack (Photo by James D. Morgan/Getty Images)

PHOENIX - As concerns continue to rise over the use of Apple's AirTag product for illegal purposes, the company has released a guide for people to stay safe.

Here's what you need to know.

An Associated Press article published in April 2021 describes AirTags as a "coin-sized devices that can be attached to keys, backpacks, purses and other items to help people track them down via iPhone if they’re misplaced."

The starting price for AirTags is $29 for a basic model.

What are some people doing with it?

There have been reports of AirTags being used to steal high-end vehicles.

In December 2021, police in Canada's York Region, which is located in the Ontario Province, announced that have identified a new method that is being used by thieves to track and steal high-end vehicles.

"Since September 2021, officers have investigated five incidents where suspects have placed small tracking devices on high-end vehicles, so they can later locate and steal them," read a portion of the statement. "Brand name ‘air tags’ are placed in out-of-sight areas of the target vehicles when they are parked in public places like malls or parking lots. Thieves then track the targeted vehicles to the victim’s residence, where they are stolen from the driveway."

Read More: Apple AirTags being used by car thieves: What you need to know to protect yourself

Various cases of people being tracked by AirTags have also been reported.

Sports Illustrated Swimsuit model Brooks Nader said that a stranger planted an Apple AirTag in her coat while she was at a New York City bar on January 7. Nader said someone tracked her for several hours, even as she walked home alone. According to Nader, she left her coat on the back of a chair and believed that's when someone dropped it in. She said the individual stalked her for five hours as she went to different New York City bars.

In Mississippi, a woman received a cell phone notification that a person was tracking her location using a device that had been placed on or near her or her property on Dec. 27, 2021, according to FOX26 Houston.

What is Apple doing to address the concerns?

Officials with the tech giant said AirTag and the accompanying Find My network are "designed with privacy at their core."

"To discourage unwanted tracking, Find My notifies you if an unknown AirTag or other Find My accessory is seen moving with you over time by sending you the message, 'Item Detected Near You,'" read a portion of a safety guide released by Apple on Jan. 25.

On the same guide, however, Apple officials noted that the ‘Item Detected Near You’ message is a feature that is only available on an iPhone, iPad, or iPod Touch running iOS 14.5 or iPadOS 14.5, as well as later versions of those operating systems, thus making that feature unavailable to those with Android devices or older Apple devices that are not able to accommodate iOS 14.5 or iPadOS 14.5.

What should I do if I get the ‘Item Detected Near You’ message?

Apple officials say if you received an ‘Item Detected Near You’ message, it means "an AirTag or other Find My accessory that has been separated from the person who registered it is traveling with you, and the owner might be able to see its location."

Apple officials have detailed the steps that people can take to disable the AirTag:

I have an Android. What should I do?

If you have an Android, Apple officials say you can download an app called "Tracker Detect" from the Google Play Store.

Alternatively, Apple officials say any AirTag that has been separated for a period of time from the person who registered it will make a sound to alert those nearby.

I found an AirTag and I feel unsafe. What should I do?

Apple officials say if a person feels like their safety is at risk, they can contact their local law enforcement agency, who can work with Apple.

"You might need to provide the AirTag, Find My network accessory, or the device's serial number," Apple officials wrote.

What are governments doing to clamp down on AirTag abuse?

In Pennsylvania, there is currently a bill being drafted that aims to ban remote stalking.

"Since Apple AirTags were introduced in April 2021, I have seen many articles about predators placing AirTags onto victims’ vehicles, purses and even coat pockets to track their location," said State Rep. John Galloway (D), in a statement released on Jan. 24. "The AirTag’s precision finding tool should only be used to locate the owner’s property, such as keys, wallet, or bookbag, as was the original intention of the product. My legislation would protect Pennsylvanians by making sure that this unwarranted act is addressed by updating our Crimes Code to prohibit someone from tracking one’s location or their belongings without consent."

The Associated Press and the FOX TV Digital Team contributed to this report. This story was reported on from Phoenix.

For the latest local news, download the FOX 10 News app