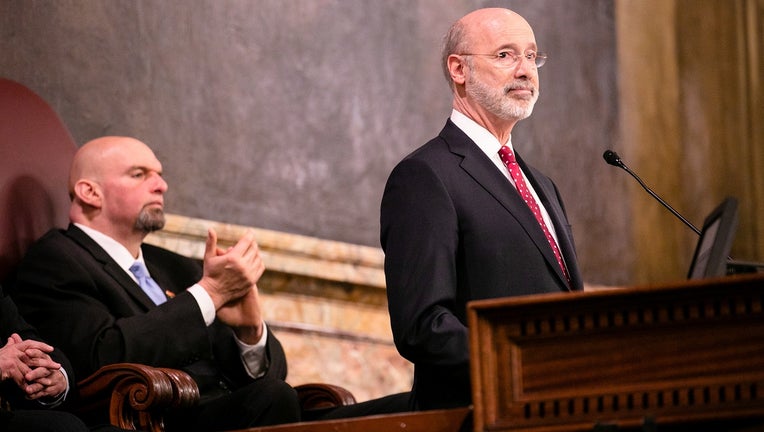 PLEASANT UNITY, Pa. - A man angry with Pennsylvania Gov. Tom Wolf's decision to close businesses during the coronavirus pandemic will face charges after he threatened the governor, authorities said.

Rocco Anthony Naples, 28, of Pleasant Unity in Westmoreland County, has been charged with a felony count of threats and other improper influence in official and political matters and related misdemeanor counts of making terroristic threats and harassment, York County authorities announced Tuesday.

According to court documents obtained by the York Dispatch, Naples called Wolf’s former business, Wolf Home Products, on Friday. He told a customer service employee he “was angry about Governor Wolf closing their companies but keeping his open, he said that him and a couple of his buddies have a bullet waiting for (Wolf) if he keeps them closed,” the documents stated.

Wolf’s press secretary, Lyndsay Kensinger, told the newspaper that Wolf Home Products does not have a state waiver to remain open during the pandemic. She also noted the governor has not been associated with Wolf Home Products since 2015, when he put the business in a blind trust.

Naples has not been arraigned or had his bail set, and it wasn't known Wednesday if he's retained an attorney. A telephone number for him could not be located.

The escalating political fight over the Wolf administration’s handling of the coronavirus has spurred several GOP-controlled counties to declare themselves in open rebellion against the Democractic governor's stay-at-home orders and shutdown of businesses deemed “non-life-sustaining.”

The counties assert they have enough testing, equipment and hospital capacity to manage flareups of the virus, but Wolf on Monday called them cowards deserting the pandemic battlefield and threatened to block aid to the rebellious counties.