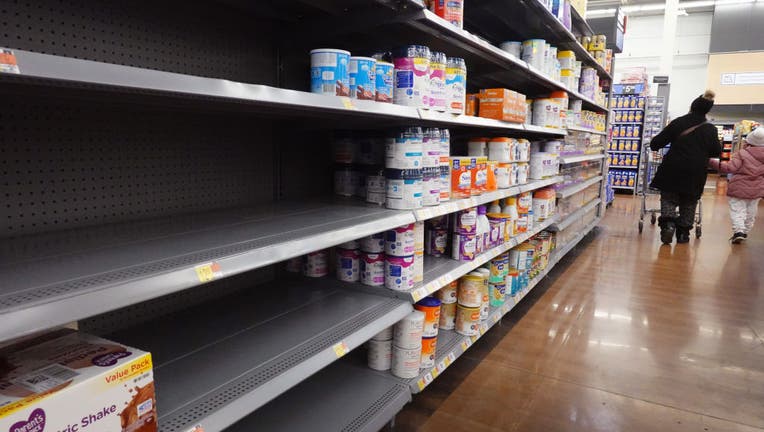 CHICAGO, ILLINOIS - JANUARY 13: Baby formula is offered for sale at a big box store on January 13, 2022 in Chicago, Illinois. Baby formula has been is short supply in many stores around the country for several months. (Photo by Scott Olson/Getty Imag

WASHINGTON - The U.S. Food and Drug Administration announced it will allow Abbott to resume producing certain baby formula products on a case-by-case basis after a massive safety recall earlier this year.

The announcement comes as many parents scramble to find baby formula because the recall and supply disruptions have led to a nationwide shortage.

In February, Abbott — one of the country’s largest infant formula makers — issued a voluntary recall, affecting certain lots of Similac, Alimentum and EleCare with expiration dates of April 1, 2022, or later. The product was distributed throughout the U.S. and overseas, the company said in a statement.

The FDA then warned parents not to use the product due to its investigation of four reports of infants who were hospitalized after consuming the formula, including one who died. The agency said one of the cases involved salmonella and three involved Cronobacter sakazakiim, a rare but dangerous germ that can cause blood infections and other serious complications.

RELATED: Baby formula shortage has parents on the hunt for product

The company shuttered its Sturgis, Michigan, plant before FDA inspectors visited the plant in March and found lax safety protocols and traces of the bacteria on several surfaces. None of the bacterial strains matched those collected from the infants, however, and the FDA hasn’t offered an explanation for how the contamination occurred.

President Joe Biden speaks about his administration's plan to tackle record-high inflation in remarks on May 10, 2022.

"Since that time, the agency has been working with Abbott and other manufacturers to bring safe products to the U.S. market," the FDA said on its website.

"We recognize that many consumers have been unable to access infant formula and critical medical foods they are accustomed to using and are frustrated by their inability to do so," FDA Commissioner Robert M. Califf said in a statement. "We are doing everything in our power to ensure there is adequate product available where and when they need it."

Prior to the recall, FDA officials were combating the global supply chain crisis which affected the supply of baby formula. The agency said it continues to address the issue.

U.S. health officials say they’re also meeting with manufacturers to understand how they can increase production, streamlining and expediting the review process that could increase supply, monitoring the status of baby formula supply, and compiling data trends to make sure formula is available in the right locations.

However, they still advise parents not to make their own infant formula but encourage them to work with their child’s health care provider for recommendations on changing feeding practices, if needed.

For now, pediatricians and health workers are urging parents who can’t find formula to contact food banks or doctor’s offices. They also warn against watering down formula to stretch supplies or using online DIY recipes.

Trying to keep formula in stock, retailers including CVS and Walgreens have begun limiting purchases to three containers per customer.

Nationwide about 40% of large retail stores are out of stock, up from 31% in mid-April, according to Datasembly, a data analytics firm. More than half of U.S. states are seeing out-of-stock rates between 40% and 50%, according to the firm, which collects data from 11,000 locations.

Baby formula is particularly vulnerable to disruptions because just a handful of companies account for almost the entire U.S. supply.