A young girl with a stutter was elated when she was given some words of encouragement on November 28 by US President Joe Biden during his stay on Nantucket. Credit: Jessica Gifford Nigrelli via Storyful.

During the Thanksgiving holiday, a Massachusetts family was greeted by President Joe Biden, who shared some encouragement with their daughter — who, like Biden, struggles with a stutter.

Jessica Nigrelli recorded the meeting between the president and her daughter, Avery.

In the video, Biden can be seen hugging Avery, telling her, "Remember this: It doesn’t define you. I have had a stutter my whole life and I’m now the president of the United States. You can be anything you want to be."

Biden and Avery went on to talk about the movie "The King’s Speech," a 2010 historical drama about King George VI, who also had a speech impediment.

Biden shared some of the tricks the former royal used when he would get stuck on certain words.

"Well holy cow. This was a thrill. President Biden is an incredible man. Not because of the office he holds but because of his humanity and compassion," Nigrelli wrote on Facebook.

Nigrelli said that Biden and her daughter spoke for 10 minutes about their stutters and how it has never hindered his ability to serve as president of the United States. 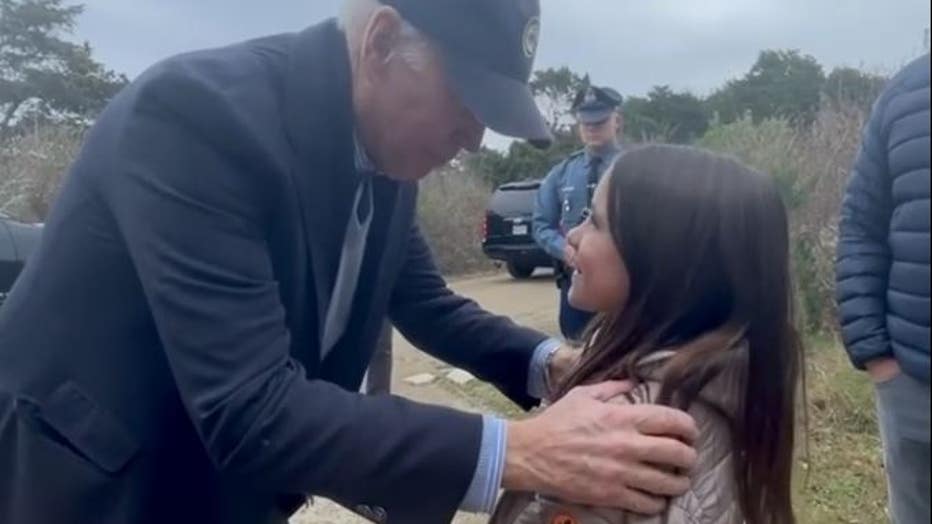 Biden greets a young girl with a stutter and gives her words of encouragement. (Credit: Jessica Gifford Nigrelli via Storyful)

Biden even invited the young girl to visit him at the White House and offered to send one of his speeches marked up with notes.

The president spent his Thanksgiving holidays on the Massachusetts island, stopping to speak with locals and well-wishers during his stay, according to local news reports.

The president has spoken frequently about how overcoming a stutter was one of the hardest things he’s done in life.

"I’ve worked my whole life to overcome a stutter. And it’s my great honor to mentor kids who have experienced the same. It’s called empathy. Look it up," said in 2019 when he was the Democratic presidential candidate.

‘Don’t let it define you’: President Biden’s speech impediment resonates with many Americans

President Joe Biden overcoming his speech impediment resonates with millions in America as they too have struggled with it, or continue to.

"It should not define them," Biden said. "The fact that they stutter doesn’t define who they are."

"There’s a lot of people who are victimized because of things that are beyond their control," he added. "I feel sometimes a little self-conscious talking about it. But I don’t regret it."

This story was reported from Los Angeles. The Associated Press and Storyful contributed.