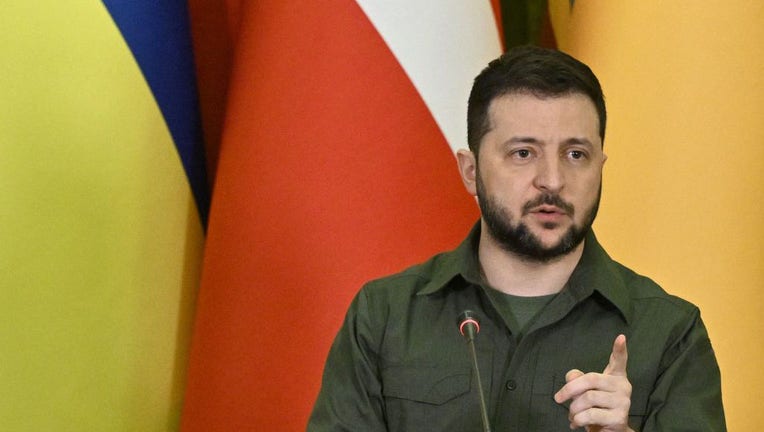 Ukraine's President Volodymyr Zelensky delivers a speech during a press conference with Denmark's and Spain's Prime Ministers in Kyiv on April 21, 2022. (Photo by Genya Savilov / AFP via Getty Images)

During a rare press conference, Zelenskyy said the top U.S. officials will meet with him Sunday to discuss Russia’s heightened aggression and additional support the U.S. can provide.

"We will talk about the list of weapons we need and the pace of their supply. In recent weeks, the pace, the number - everything has improved. I'm grateful for that," he said.

Fox News could not immediately reach the State Department to verify the trip or what will be discussed.

The U.S. has provided over $4 billion in security assistance to Ukraine since August 2021 – $3.4 billion of which has been allotted since Russian President Vladimir Putin’s February invasion.

President Biden announced this week that another $800 million in security assistance would be provided and strategically tailored to help fight Russia’s second campaign in the eastern regions of Luhansk and Donetsk.

The U.S. not only allotted another 72 Howitzers, which are long-range weapons similar to a canon, tactical vehicles to tow the Howitzers, field equipment and spare parts, but the U.S. Air Force developed over 120 "Phoenix Ghost" drones specifically designed for Ukrainian needs.

RELATED: Phoenix Ghost: Pentagon fast-tracks mystery drone for Ukraine. What is it?

A senior defense official said the drone will have similar capabilities to that of a Switchblade drone – which is easily carried and launched by an individual soldier and detonates after it crashes into its target – but the complete scope of its capabilities remains undisclosed.

The package announced Thursday is the eighth drawdown since August from Department of Defense inventories for Ukraine.

Officials have warned the war in eastern Ukraine will rely heavily on modern artillery.