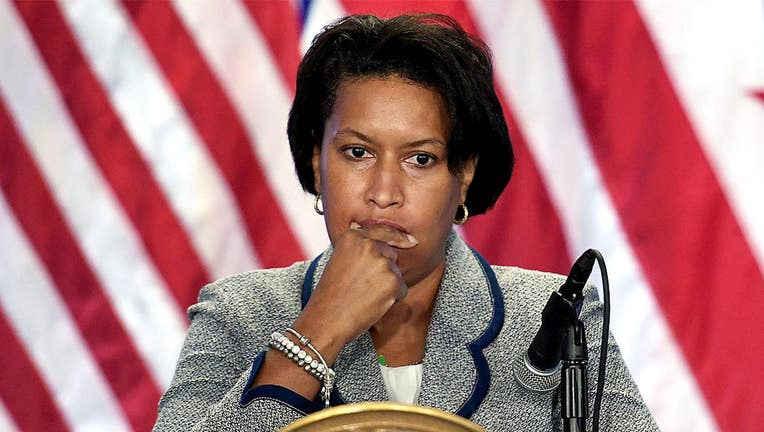 Washington DC Mayor Muriel Browser listens during a public safety briefing at the Marion S. Barry, Jr., Building in Washington, DC, on July 28, 2021. Bowser is lifting mask mandates for indoor restaurants and bars, but not for schools. (Photo by Oliv

WASHINGTON - Washington, D.C., Mayor Muriel Bowser said Monday that the city will lift its mask requirements for many public venues, including bars, restaurants and schools – but it will still mandate masks for schoolchildren.

"Because of that diligence that we have seen since the height of omicron wave entered the district in December, cases have dropped more than 90% and there has been a 95% reduction in hospitalizations," Bowser said. "We are in a much better place now."

Bowser did not say that the mask mandate in the city would be fully lifted, only that they will be "dialed back." The places where people will no longer have to wear masks will be "[r]estaurants and bars," "[s]ports and entertainment venues," supermarkets, pharmacies, retail businesses, private offices, D.C. government offices and "[h]ouses of worship."

But the district will still require masks at "schools, childcare facilities and libraries," as well as healthcare facilities, jails, and on public transit. Bowser was asked about when the district might lift mask mandates in schools, which have been harshly criticized by parents as potentially harming the development of children, especially younger ones.

"That's a good question," she said. "We continue to work with our school communities over what they think it will take to keep kids safe and in school. We thought that our last group of little ones would have access to the vaccine in February. It turns out it's going to be sometime later. So I don't think that we're going to have a decision about schools sometime soon."

"The limited public health emergency that I put in effect in December expires, as will the requirement for indoor venues to verify that patrons are vaccinated," on Tuesday Bowser also said regarding the vaccine mandate ending.

The timing of that decision sparked backlash from supporters of The Big Board, a D.C., bar which was shut down for its refusal to comply with the vaccine mandate.

"You shut down @thebigboarddc, a veteran-owned small business, for nothing. Disgraceful," Rep. Dan Bishop, R-N.C., tweeted.

Bowser was also asked about The Big Board. She said dodged making any specific statement about the bar but said the city may have already accomplished its goals of increasing vaccination rates with its mandates.

"As understand it, Big Board is still in the process with [the Alcoholic Beverage Regulation Administration] and that process will play itself out. I don't know all of the details. But Big Board was found to violate our requirements and now that those requirements will be changing, first with the vaccine requirement sand then with the mask requirements," she said.

"I will say we look very closely at our levels of vaccination. We did see at the hight of omicron with a lot of attention on omicron vaccine mandates in place," Bowser added. "But we've also seen those numbers start to decline. So we do believe that we've gotten the push out of the vaccine requirement for indoor venues that we're gonna get."