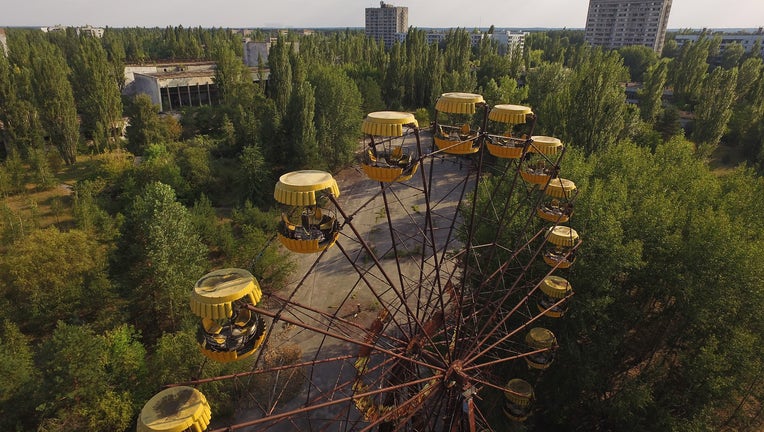 FOX NEWS - The creator of HBO’s critically acclaimed miniseries “Chernobyl” is urging tourists who visit the real-life site to remain respectful of the area’s history.

Craig Mazin took to Twitter with his message on Tuesday, following news of increased demand for Chernobyl tours as a result of the show.

“It's wonderful that #ChernobylHBO has inspired a wave of tourism to the Zone of Exclusion,” Mazin said. “But yes, I've seen the photos going around. If you visit, please remember that a terrible tragedy occurred there. Comport yourselves with respect for all who suffered and sacrificed.”

The photos to which Mazin is likely referring to began making the rounds on social over the weekend. Twitter user Bruno Zapan gathered four photos that seemingly show Pripyat visitors posing in the Exclusion Zone around Chernobyl, wearing uniforms, measuring radioactivity, and in one woman’s case, modeling little more than a thong.

“Meanwhile in Chernobyl: Instagram influencers flocking to the site of the disaster,” Zupan wrote.

Zupan later clarified that he was not intending to shame anyone and discouraged users from lashing out at the people in the photos, but some took the message to mean that influencers were shamelessly exploiting the Chernobyl tragedy for likes.

As The Atlantic noted, however, most of those photos weren’t taken by influencers at all, but rather visitors who toured the area with one of the multiple agencies that offer trips through the Exclusion Zone.

Irene Vivch, pictured in one of those photographs, told the outlet she was born in Ukraine and has a personal connection to the tragedy. Her original post also contained a thoughtful caption discussing the tragedy.

Another photo, showing a man holding a Geiger counter, is nearly a decade old, the Atlantic reported.

Some, however, were still critical of a few of photos, despite the intentions of those who originally posted them.

“I saw the first picture and thought that it was done respectfully and didn’t really understand what you were complaining about. Then I saw three and four,” one user wrote.

“Someone seriously in their underwear… anything for likes,” another wrote of the last woman, who has since earned nearly 8,000 Instagram followers in the last few days.

The controversy also likely stems from recent reports that tour operators near the site of the Chernobyl disaster say they’re seeing increased demand of up to 40 percent over last year’s numbers — and they’re crediting the boost to the release of HBO’s “Chernobyl” miniseries.

“Many people come here, they ask a lot of questions about the TV show, about all the events. People are getting more and more curious,” tour guide Viktoria Brozhko told Reuters.

Some of the tours’ websites also stress the safety of the excursions, with SoloEast advertising “100-percent safe” tours — and urging that a trip to Chernobyl poses less radiation exposure than a long flight. Another company, Chernobyl Tour, claims its short visits pose very little risk, and that the tour stays far from areas of acute radiation.

The 1986 explosion at the Chernobyl nuclear plant in Ukraine sparked a widespread environmental disaster. Thirty workers died either from the explosion at the number four reactor or from acute radiation sickness within several months. The accident exposed millions in the region to dangerous levels of radiation and forced a wide-scale, permanent evacuation of hundreds of towns and villages in Ukraine and Belarus.

There are varying estimates for the final death toll from Chernobyl, due to the long-term effects of radiation. In 2005, the International Atomic Energy Agency estimated the total death count from the disaster at around 4,000, whereas the World Health Organization has estimated 9,000 deaths. A recent study out of Belarus, meanwhile, estimated that number at 115,000.

Get updates on FOXNews.com