FOX 29's Alex George has more on an event Sunday in Conshohocken to support the Asian-American community in the wake of a deadly mass shooting in Georgia.

CONSHOHOCKEN, Pa. - An event held Sunday in Conshohocken rallied support for Asian-American communities in the wake of last week's deadly shooting at a spa in Georgia and rising violence against Asian-Americans.

"It's really unfortunate that it had to escalate in lives being taken for people to really see what the Asian plight is," Julia Park said.

Several speakers stepped to the mic at Sutcliffe Park to mourn the loss six Asian-American women gunned down at Atlanta-area spas on Tuesday. Speakers also talked about rising hate crimes and the Asian-American experience.

"It's very cathartic," Park said. "To feel invisible for so long and to suddenly feel like people see you, it's sort of like coming to life."

Robert Aaron Long, 21, is charged with killing four women at the Atlanta spas and four other people inside a massage business about 30 miles away in Cherokee County.

Long, who is white, told investigators the attacks were not racially motivated and claimed to have a sex addiction, which caused him to lash out at what he saw as sources of temptation. 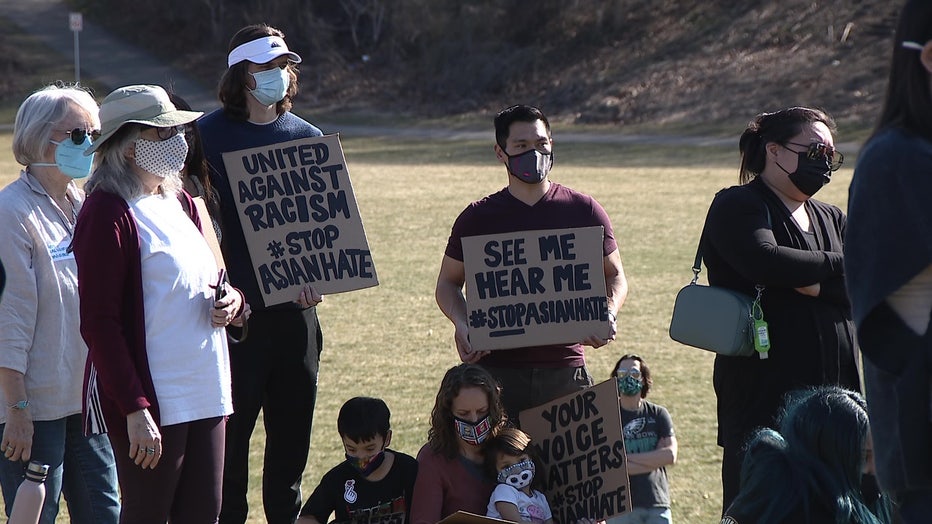 Police in both Atlanta and Cherokee County said they were investigating if the killings could be considered hate crimes. Seven of the victims were women — six of Asian descent — and the gunman targeted the massage businesses despite a strip club and lingerie stores nearby.

Recent attacks, including the killing of an 84-year-old San Francisco man in February, have raised concerns about worsening hostilities toward Asian Americans. Nearly 3,800 incidents have been reported to Stop AAPI Hate, a California-based reporting center for Asian Americans and Pacific Islanders, and its partner advocacy groups, since March 2020. Nationally, women reported more than double the number of hate incidents compared with men.

Organizations in Philly working against anti-Asian violence and racism

Police in several major cities saw a sharp uptick in Asian-targeted hate crimes between 2019 and 2020, according to data collected by the Center for the Study of Hate & Extremism at California State University, San Bernardino. New York City went from three incidents to 27, Los Angeles from seven to 15, and Denver had three incidents in 2020 — the first reported there in six years.