During a White House COVID-19 briefing, Jeffrey Zients highlighted companies and businesses that are increasing vaccination mandates and implementing new policies and initiatives to help slow the spread of the highly contagious delta variant.

First responders in the United States are dying from COVID-19 at growing rates and despite the increasing numbers, they are among some of the most hesitant to get the vaccine.

It’s a stark contrast from the beginning of the vaccine rollout when first responders were prioritized for shots.

According to the Officer Down Memorial Page, 132 members of law enforcement agencies are known to have died of COVID-19 in 2021. In Florida alone last month, six people affiliated with law enforcement died over a 10-day period.

No national statistics show the vaccination rate for America’s entire population of first responders, but individual police and fire departments across the country report figures far below the national rate of 74% of adults who have had at least one dose. 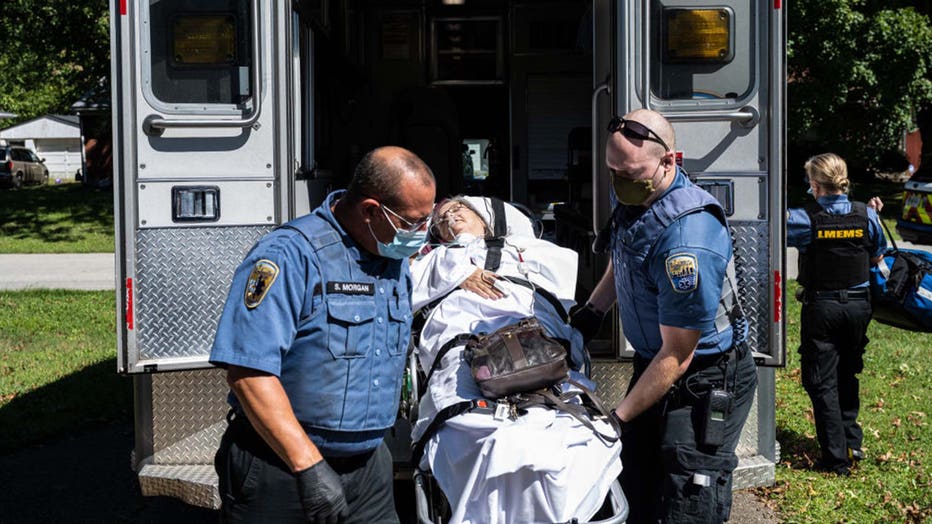 FILE - EMS paramedics transport to a woman suspected of experiencing a severe COVID-19 emergency on a medical gurney from her home into an ambulance on Sept. 6, 2021.

RELATED: More than 1 in 4 new COVID-19 cases are now in children, report says

Frustrated city leaders are enacting mandates for their municipal employees — including police officers and firefighters — as the delta variant surges.

The mandates affect tens of thousands of police officers, firefighters and others on the front lines across the country, many of whom are spurning the vaccine. That is happening despite mandates’ consequences that range from weekly testing to suspension to termination — even though the virus is now the leading cause of U.S. law enforcement line-of-duty deaths.

Dr. Jennifer Bryan, a family physician and member of the Mississippi State Medical Association’s Board of Trustees, says she's working to change minds a half-hour appointment at a time in a state with one of the lowest vaccination rates in the country. With first responders, she reminds them that they can become patients, too.

"It's harder when you want to protect those who are on the front lines," she said. "When you share air with someone, there’s a risk. If you share more air with sick people and your job is more public-facing, then you are at risk."

"This vaccine really is about not just protecting yourself but protecting your coworkers, your community, people who go to your church, people in your kids' school," said Seattle Mayor Jenny Durkan, whose city requires all employees to be fully vaccinated by Oct. 18 or face termination.

Unions across the country are fighting back. Shon Buford, president of San Francisco Firefighters Local 798, is urging city leaders to delay their Oct. 13 vaccinate-or-terminate deadline.

Twenty workers who did not disclose whether they had received a shot by a previous deadline may receive 10-day unpaid suspensions. One firefighter has sued San Francisco, which was the first major U.S. city to adopt a vaccine mandate for its workers. The overwhelming majority of the city's workforce of 36,000 is vaccinated, according to The San Francisco Chronicle.

In Los Angeles, over 3,000 employees in the police department have been infected by the virus and the numbers continue to climb. Ten LAPD workers have died, as well as three spouses.

RELATED: 75% of US adults have received at least 1 dose of COVID-19 vaccine, CDC says

LAPD Chief Michel Moore said 51% of the department has been vaccinated as of Aug. 31 and more than 100 personnel got their shots in the last week and a half.

In California's state prisons, a federal judge could order all correctional employees and inmate firefighters to be vaccinated under a class-action lawsuit. In mid-July, 41% of correctional officers statewide had at least one dose of a vaccine, compared to 75% of inmates.

"Every minute, every day, every week we delay, it’s putting our clients at greater and greater risk," said Rita Lomio, a staff attorney at the nonprofit Prison Law Office, which is representing the state's incarcerated people in the lawsuit.

The summer that was supposed to mark America’s independence from COVID-19 is instead drawing to a close with the U.S. more firmly under the tyranny of the virus, with deaths per day back up to where they were in March.

The delta variant is filling hospitals, sickening alarming numbers of children and driving coronavirus deaths in some places to the highest levels of the entire pandemic. School systems that reopened their classrooms are abruptly switching back to remote learning because of outbreaks. Legal disputes, threats and violence have erupted over mask and vaccine requirements.