PITTSBURGH, Pa. - Six siblings who spent more than four years in foster care have found a forever home and will remain together, thanks to a Pennsylvania couple.

Steve and Rob first met through a retail job 18 years ago and later married. They raised two of Steve's biological sons, now 25 and 21, from a previous marriage.

“I think we've always known that we wanted to expand our family and continue on being parents,” Steve said. “We always kind of say that we weren't done yet being parents to young people.”

The pair said they had considered the idea of just fostering children, but decided on the foster-to-adopt route instead.

“It would be great to provide temporary help to kids in the foster system, but at the same time that could be emotionally exhausting,” Rob explained. “So even though we had two adult kids, we still had enough pep and energy to raise smaller children and to actually adopt them and not just foster.”

The couple saw the six children on an Ohio adoption website. They completed home studies, classes and background checks and began emailing back and forth with the kids' case worker in early 2018.

“We received very little information at first, and then as time goes on and they got to know us a little bit after they read our home study and our profiles, then they supplied us with a little more information,” Steve said. “So it was kind of a long process.”

They were matched with the kids in June 2018 and met them for the first time on July 2 at a bowling alley venue in Columbus, Ohio.

“We were nervous, just like the kids were,” Rob said.

“There's always a little bit of an awkward start there because you're thinking potentially these could be the children that are going to be in our lives forever,” Steve said. “And like I said, we were already involved with them. We hoped they liked us.”

After the inevitable “awkwardness,” the couple said they bonded quickly with the six children during that first meeting, and the kids were eager to show them their “lifebooks” to share some of their past with Steve and Rob.

It can be difficult to find families willing to adopt or foster multiple siblings. Estimates indicate that 75 percent of sibling groups end up living apart after they enter foster care.

All six of the Anderson-McLean kids, who are full biological siblings, were able to stay together during their 1,640 days of foster care.

“In foster care, young kids are adopted very quickly. The kids that are nearing teenage years or are teenagers, unfortunately, they're the harder kids to place,” Steve said. “They had had some interest in just the younger two or three, but the case worker they had really wanted to try and keep them together.”

Steve and Rob said they hated thinking of any sibling group being divided and were inspired to do their part to try and keep them together. Making the jump from two people in the house to eight, however, required some planning and adjustments in their own lives.

Steve is now a stay-at-home dad after a career as a wedding planner prior to the adoption, while Rob works as an engineer for Norfolk Southern Railway. They also invested in a “soccer dad” minivan in order to transport their new, larger Anderson-McLean family. 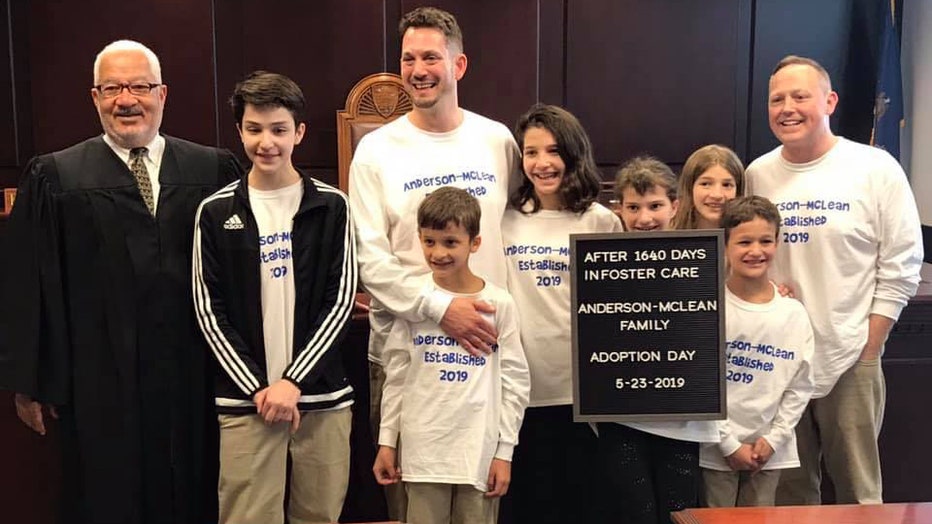 The kids' official adoption day was both celebratory, yet “very emotional.” The family, dressed in matching “Anderson-McLean Established 2019” shirts, were surrounded by other relatives and friends. Once it was completed, there was a “very visual sigh of relief from everyone,” Steve said.

“There's a lot of insecurity for kids in their situation. They're always worried that something is going to change. Even though we tell them that we're going to adopt them, and everyone's telling them this, they've been let down so many times by other adults,” Rob explained. “So that's why it was such a relief to finally have the finalization because they know it's permanent. They're not foster kids anymore. They can take that title away from their name.”

The siblings attend the local school district, and their teachers even threw them “finalization” parties after the adoption became official. They'll start summer break next week.