A Delaware County bartender is hosting "Cocktails with a Cause" to help raise money for Ukraine refugees who continue to flee their homeland in record numbers. Sam Whitaker connected with a Ukrainian web designer and her young daughter days before Russia launched its full scale invasion.

WAYNE, Pa. - A local bartender concocted a way to help Ukrainian refugees after he was inspired by a connection he made with a Ukrainian woman and her young daughter.

A week before Russia's full scale invasion of Ukraine, Sam Whitaker hired Vika, a Ukrainian woman, to design a web page for a project he was working on. Days later, Vika and her 5-year-old daughter fled to Italy to stay with relatives as Russian forces pillaged Ukraine.

Sam managed to stay in touch with Vika during the ongoing war in Ukraine. The United Nations says nearly 3.5 million people have left Ukraine since the start of the Russian invasion, the largest exodus of refugees in Europe since World War II.

"You can see it on TV, you can see it in the news, but actually talking to someone, it's really, really different," Sam said. 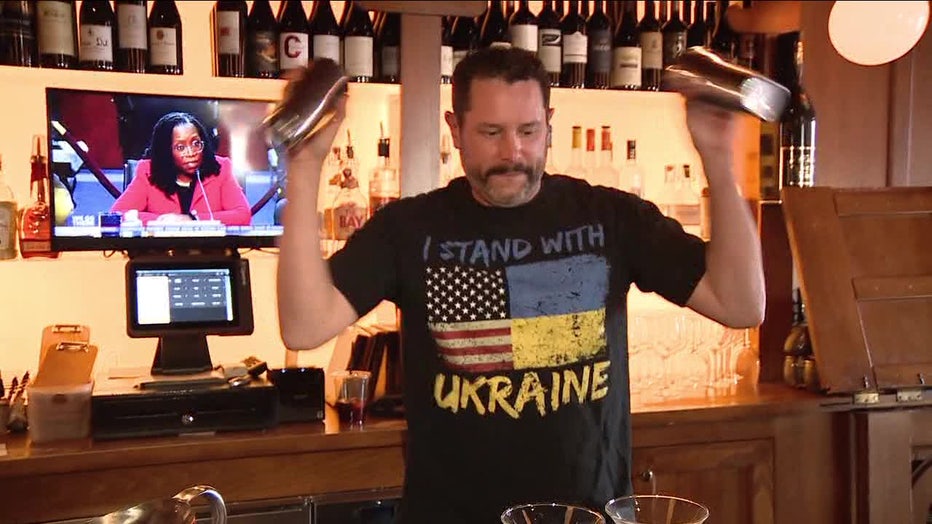 Inspired to help the Ukrainian people through his personal connection with Vika, Sam asked employer Fearless Restaurants to host "Cocktails with a Cause" at their eight area locations.

"Honestly it gets me mad you know. These people just want to live their lives, and they can't, so doing something about it. I've always felt that if everybody does a little bit together we can do a lot."

The event will be held on next Monday and proceeds from drinks like the "Kiev Mule" and Penns Wood Pinot Noir will go to two charities helping Ukrainian refugees.

"I feel like everybody is trying to do something, and I feel like this is such a fun incentive as well," said Kelsey Klatt, a nearby employee.

Sam will also send all the money that he makes in tips next Monday directly to Vika and her daughter.