A total of 20 White House hopefuls will participate in the first Democratic primary debate, with 10 on Wednesday and the 10 other appearing Thursday.

MIAMI - The 2020 presidential race will heat up Wednesday evening with the first Democratic primary debate set to begin.

With the field so large, the debate will be split into two nights. A total of 20 White House hopefuls will participate, with 10 on Wednesday and the 10 other candidates — including former Vice President Joe Biden and Vermont Sen. Bernie Sanders — appearing Thursday.

The candidates were randomly selected to appear on the first or second night. 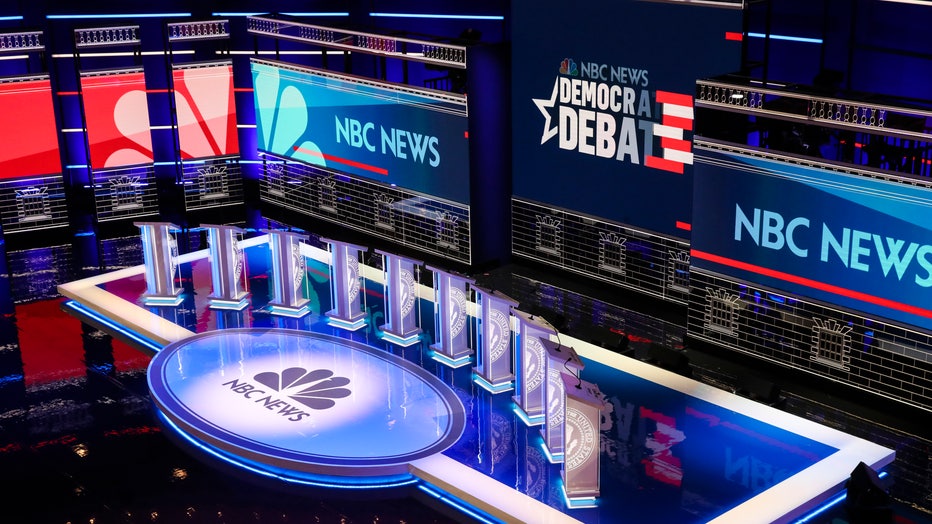 The stage is set for the first Democratic presidential primary debate for the 2020 election at the Adrienne Arsht Center for the Performing Arts, June 26, 2019 in Miami, Florida. (Photo by Drew Angerer/Getty Images)

Warren, the polling leader among Wednesday’s participants, will take center stage. The Massachusetts senator's constant stream of policy proposals has helped her campaign gain ground. Strategists say that Warren, widely viewed as a talented debater, is well positioned to showcase her strengths.

"I don't think anyone else on that night has her level of skill and her level of experience in this format," said Maria Cardona, a Democratic strategist. "I think she should look at this as an opportunity to really shine and come out of the first night as the one that is dominating the conversation."

Experts say Warren could "have a target on her back" from some of the lesser-known candidates on stage, as they could use the moment to take aggressive stances against her in an effort to find a breakout moment for their campaigns.

"She's liable to have a target on her back and a lot of people potentially coming after her on that stage," said Charles Chamberlain, the chairman of the progressive political action committee Democracy for America. "But on the other hand, that will let people see how she handles attacks and can fend them off."

One split that could emerge Wednesday centers on "Medicare for All," the single-payer health care plan introduced by Sanders and supported by Warren and others. The proposal would put the government in charge of most health benefits. Some candidates are not fully on board, preferring more incremental reforms. Delaney has been especially vocal in his criticism.

With so many White House hopefuls on stage, it could be difficult to dive too deep on any given issue.

During the debate, candidates will have one minute to answer questions and 30 seconds to respond to follow-ups, according to NBC News, which is hosting the debate. No opening statements will be given but the candidates can share closing remarks.

A strong debate performance could fuel more donations, which is critical to the candidates' ability to participate in future debates. The Democratic National Committee is enforcing more stringent requirements for participating in the presidential primary debates this fall, so candidates who are struggling to gain a foothold may not have another similar opportunity on a nationally televised stage unless they are able to significantly boost their standing in the polls and fundraising numbers.

"For some of them, this might be their best opportunity to land a blow," said Joel Payne, a Democratic strategist.

"People may have heard (the candidates') names, but they couldn't pick them out and don't know much about them," said Jesse Ferguson, a veteran Democratic strategist. "None of them are going to seal the deal in the first debate, but they need to get people interested enough to want to learn more."

The debate's second night on Thursday will feature more of the leading Democrats in the race. Biden will stand at center stage with Sanders at his left and Mayor Pete Buttigieg of South Bend, Indiana, at his right. The former vice president has come under fire from fellow Democrats after recently recalling that the Senate was once a more civil place, pointing to his work with two segregationist former senators.

Besides Biden, Sanders and Buttigieg, other participants on Thursday’s stage will include Sens. Michael Bennet of Colorado, Kirsten Gillibrand of New York and Kamala Harris of California, along with former Colorado Governor John Hickenlooper, Rep. Eric Swalwell of California, author Marianne Williamson and businessman Andrew Yang.

The candidates qualified to participate in the first and second debates by having 65,000 donors contribute to their campaign, with a minimum of 200 donors from at least 20 different states, according to PBS. Candidates could also qualify if they receive “1 percent support in three DNC-approved polls.”

Viewers see the debate on NBC News, MSNBC and Telemundo, as well as online platforms, Wednesday and Thursday from 9 to 11 p.m. Eastern.

NBC News announced that Savannah Guthrie, Lester Holt, Chuck Todd, Rachel Maddow and José Diaz-Balart will moderate the debate, which is being held at the Adrienne Arsht Center for the Performing Arts in downtown Miami, Florida.

The June debate will be the first of six scheduled for 2019.