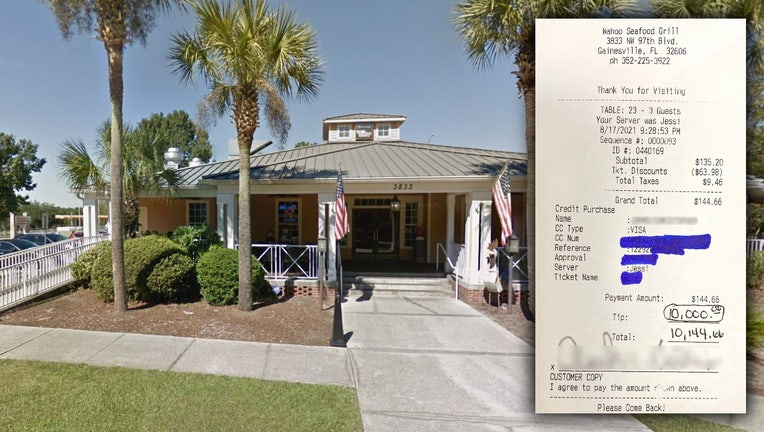 GAINESVILLE, Fla. - A diner at a north Florida restaurant gathered the staff of 10 together to thank them for their hard work before leaving them a $10,000 tip to share.

It happened last Tuesday night as the man, his wife and son finished their dinner at the Wahoo Seafood Grill, the Gainesville Sun reported.

Shawn Shepherd, who owns Wahoo, told the newspaper he got a call from his employees that night, alerting him to the big tip. His first thought was to be suspicious.

"Check his ID and the name on the back of his credit card," Shepherd advised the employee who called.

But the restaurant's point-of-sale system approved the transaction. Shepherd said he checked back the next day to make sure the money was still there.

"Watching these guys get their check was almost as good as Christmas morning," Shepherd told the Sun.

He said he's very thankful to the diner because his employees have been loyal to the restaurant through the pandemic.

Among those benefitting from the big tip was Ashley Green, who was called into work that day. She had recently endured a rough time because her daughter was ill.

"She’s had a hard month, she’s been not able to work. Kid has been in and out of the hospital. It’s been absolutely a really stressful time for her," Shepherd said.

When the coronavirus pandemic began, Shepherd said he temporarily closed the Wahoo and lost some $30,000 in food.

He noted that the Florida Restaurant Lodging Association and the Alachua County Chamber of Commerce were a big help, finding them emergency funding to pay the employees. He reopened the Wahoo in May.

He said he's indebted to his employees because they've helped keep the restaurant afloat during hard times.