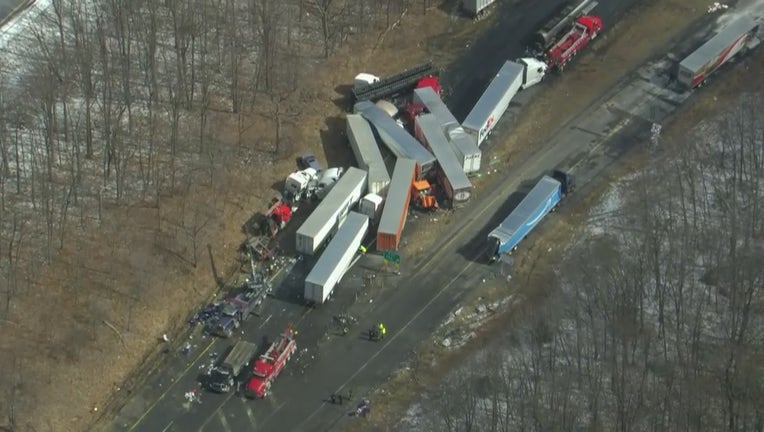 POTTSVILLE, Pa. - Genetic material will be needed to positively identify the six people killed during an 80-vehicle pileup on a Pennsylvania interstate during a snow squall last month, authorities said.

Dr. David Moylan III, the Schuylkill County coroner, told The (Pottsville) Republican-Herald on Friday that "we need to get some DNA samples" from relatives of the four men and two women killed in the March 28 crash on I-81.

Officials said earlier that the victims of the March 28 crash near the Minersville exit of I-81 were all between 40 to 70 years old and all burned beyond recognition. "All of the decedents were found in the group of vehicles that were on fire," Deputy Coroner Albert Barnes said.

Two were found in a box truck that was one of the first vehicles involved in the crash. They are believed to be from Montgomery County in Pennsylvania. Also killed was a man in a tractor-trailer, a man and woman in a car and another man in a car, all believed to have been from out of state.

Moylan said the coroner's office is working with out-of-state law enforcement to get DNA samples to be sent to a national lab for testing against material recovered from crash victims. He said it will take "at least a week and maybe another week to get the results."

Moylan said earlier that officials were "99.8 percent sure" about the identity of the victims "but we want to be 100 percent sure."

The crash was captured in videos posted on social media that showed drivers and passengers lining the snowy road and jumping out of the way as the cascade of crashes unfolded. Some vehicles were mostly burned and others melted onto the highway, hampering efforts to clear the scene.