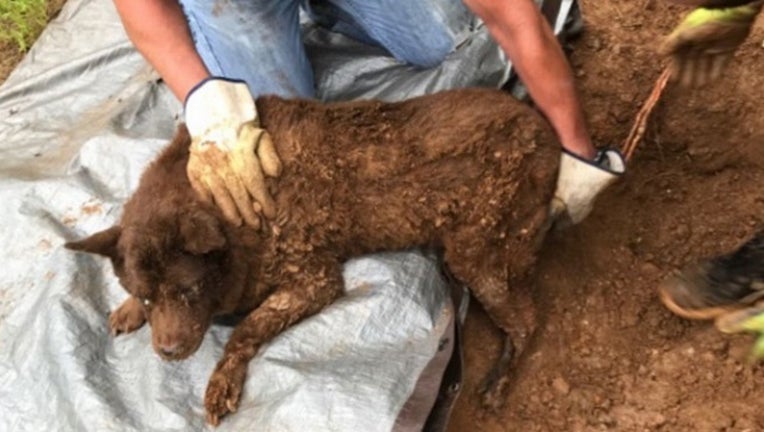 (INSIDE EDITION) - A Georgia dog has died, just a day after she was discovered buried up to her nose along a dirt trail in DeKalb County.

The dog, named Lulu, was unable to move and the man who discovered her, Eric Perdue, told local news outlet WXIA-TV that he predicted she had been trapped there for at least two days.

Perdue, along with his nephew and son, found Lulu on June 6 as they were walking along the trail. They said it took them 30 minutes to free the brown chow mix, which they brought to a local animal hospital.

Perdue planned on adopting Lulu. However, the dog died the next day.

The case remains unsolved. PETA and the Humane Society are offering a combined $15,000 reward for any information leading to an arrest in the case.

"Someone must know where this dog came from and who buried her alive, leaving her to suffer in terror for days," PETA Vice President Colleen O'Brien said in a statement. "PETA is urging anyone with information about this dog or her tormentor to come forward immediately before anyone else gets hurt."

Anyone with information about who buried Lulu is asked to call DeKalb County Animal Services at 404-294-2939.