A dog was given a second chance at life after being left at a Camden garabge dump. FOX 29's Bill Anderson has the story.

NEW JERSEY - A dog left to die in a Camden garbage dump was given a second chance at life and was recently named the 2019 ASPCA Dog of the Year.

“It’s pretty evident she was used as a bait dog or a dog that was fighting and just wouldn’t fight back.  She wasn’t useful anymore.  She was ripped up and would’ve cost a lot of money," Kathy McGuire told FOX 29. “The Good Samaritan said she was crying and whimpering and she was so friendly with her arms up in the air like help me.  She didn’t put herself there with the other animals that were deceased.” 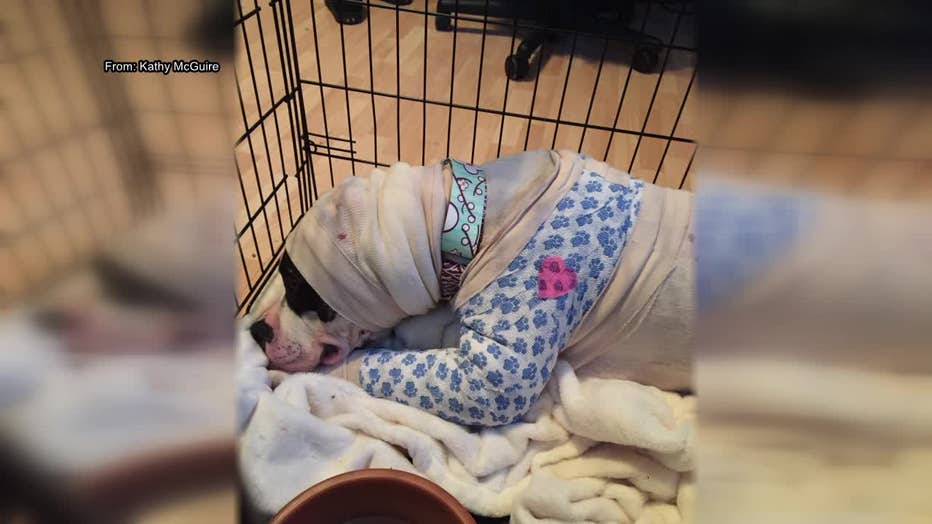 Sweet Pea has been recognized as ASPCA's Dog of the Year.

Sweet Pea had literally been thrown in the trash in Camden to die and was so injured that euthanasia seemed the only option. However, McGuire had other plans.

“I stumbled upon Sweat Pea. She had been there for five days and she had to be held for seven days so she had two more days left before she was going to be euthanized. I took her," McGuire explained.

Sweet Pea became the official face of an anti-dog fighting campaign and she was recently recognized as the ASPCA's dog of the year.

“She went from a garbage dump in Camden, New Jersey to the dog of the year for the ASPCA in New York," McGuire said.

Mcguire and her non-profit  New Jersey Aid for Animals fight to show the power of opportunity and transformation.

An anonymous donor has agreed to donate one dollar for every like Sweet Pea's Facebook page receives.The money goes to care for abandoned and abused animals. For more information, please click here.