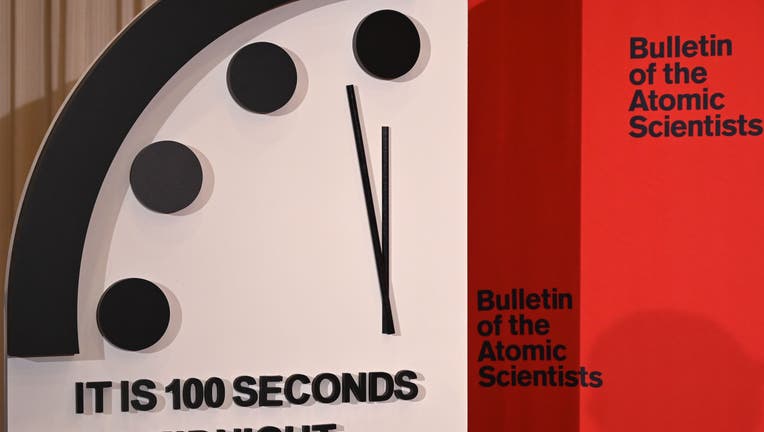 The Doomsday Clock reads 100 seconds to midnight, a decision made by The Bulletin of Atomic Scientists, during an announcement at the National Press Club in Washington, DC on January 23, 2020. (Photo by EVA HAMBACH/AFP via Getty Images)

WASHINGTON - The keepers of the Doomsday Clock on Thursday moved the symbolic countdown to global disaster to the closest point to midnight in its 73-year history, citing "existential danger" from nuclear war and climate change.

The Bulletin of the Atomic Scientists, which was founded after the creation of the atomic bomb in World War II and focuses on the greatest threats to human survival, said it moved the clock from two minutes to midnight to 100 seconds to midnight -- a 20-second advance.

The decision was made by the group's science and security board, in consultations with its board of sponsors, which includes 13 Nobel laureates.

In a statement accompanying the clock's advance, the organization said the nuclear and climate dangers "are compounded by a threat multiplier, cyber-enabled information warfare that undercuts society's ability to respond."

"The international security situation is dire, not just because these threats exist, but because world leaders have allowed the international political infrastructure for managing them to erode," it said.

Rachel Bronson, president and CEO of the Bulletin of the Atomic Scientists, said: "We are now expressing how close the world is to catastrophe in seconds -- not hours, or even minutes."

"We now face a true emergency -- an absolutely unacceptable state of world affairs that has eliminated any margin for error or further delay," she said.

"Climate change just compounds the crisis," he said. "If there's ever a time to wake up, it's now."

The Doomsday Clock didn't move in 2019 but in 2018 it advanced by 30 seconds from 2 1/2 minutes before midnight to two minutes to midnight.

As the symbolic clock was moved on Thursday, the Bulletin's experts were joined by former Irish President Mary Robinson who now leads The Elders, a group of prominent former world leaders founded by Nelson Mandela, and ex-U.N. Secretary-General Ban Ki-moon, now deputy chairman of The Elders.

Ban said that from the U.S. withdrawal from the 2015 Paris climate agreement and the Iran nuclear deal to deadlock at nuclear disarmament talks and divisions in the U.N. Security Council, "our mechanisms for collaboration are being undermined when we need them most."

Robinson called on world leaders to join in working "to pull humanity back from the brink."