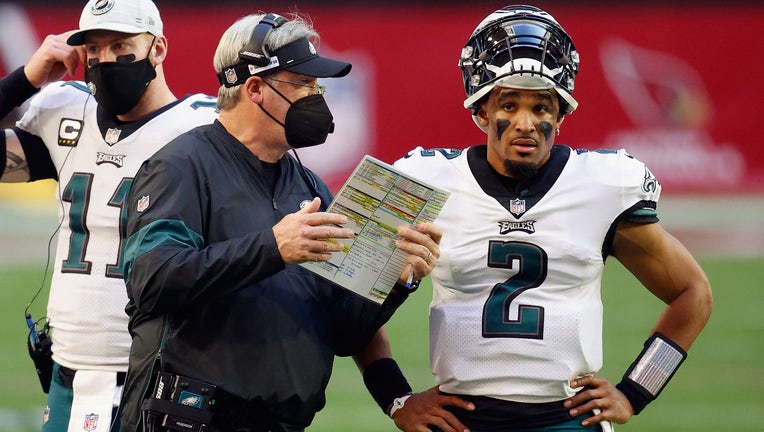 Head coach Doug Pederson of the Philadelphia Eagles talks with quarterback Jalen Hurts #2 during the second quarter against the Arizona Cardinals at State Farm Stadium on December 20, 2020 in Glendale, Arizona. (Photo by Christian Petersen/Getty Imag

PHILADELPHIA - Doug Pederson led the Philadelphia Eagles to the franchise’s only Super Bowl title with a backup quarterback just three years ago and followed up with consecutive playoff appearances.

He’s not planning to bail after one losing season.

"I don’t want out of Philly," Pederson told The Associated Press on Tuesday. "It is a great place to work."

Pederson, who has two years remaining on his contract, shot down any notion that he’d like to get out of his deal or get fired so he can go coach another team.

"That is the furthest from the truth," he said.

Despite a dismal 4-9-1 record and a quarterback controversy, the Eagles are still in the race for the NFC East title. They need victories over Dallas (5-9) and Washington (6-8) in the final two games plus Washington must lose to Carolina (4-10) this week and the New York Giants (5-9) have to lose one of their last two games.

Washington is a 2 1/2-point favorite over the Panthers and the Giants are 11-point underdogs at Baltimore.

The Eagles overcame big odds to get in the playoffs in 2018. They needed Chicago to win in Minnesota as a 6 1/2-point underdog in Week 17. The Bears knocked off the Vikings, the Eagles beat Washington and earned a wild-card spot. Then, Nick Foles led them to a playoff win at Chicago before losing to New Orleans in the divisional round.

"We have had a ton of success around here in my five years here," Pederson said. "This is a down year for a lot of reasons, but we are still in the thick of it. It’s all about getting into the tournament."

Three starters in the secondary were out last week and that proved costly in the loss to the Cardinals as Kyler Murray threw for a career-best 406 yards and three touchdowns.

Since Pederson made the difficult decision to bench Carson Wentz for rookie Jalen Hurts in the second half of a loss at Green Bay on Dec. 6, the offense has been invigorated. Hurts ran for 106 yards in a surprising win over the New Orleans Saints in his first career start. He was impressive, throwing for 338 yards and three touchdowns, in a 33-26 loss at Arizona.

Hurts will be behind center again when the Eagles visit the Cowboys with their season on the line Sunday. Philadelphia has thrived in do-or-die situations over the past three seasons.

Under Pederson, the Eagles are 11-2 in games they must win or be eliminated from the playoffs or contention. Many of those victories came with a depleted roster. Foles stepped in after Wentz went down in 2017 and 2018. Wentz led the team to four must-wins last December with several offensive starters sidelined by injuries.

Pederson's ability to rally the team around a "next man up" mentality is one of his best qualities as coach.

"He’s been a hell of a coach for this organization, bringing a Super Bowl, of course," assistant head coach Duce Staley said last week. "I don’t want him to leave. I don’t want him to go anywhere, and all the assistant coaches, they feel the same, but I’m speaking for them right now. The things as far as what he’s done for us. .... giving us the opportunity to have a voice, giving us the opportunity to do certain things, it’s been awesome. And every coach would tell you that."

The organization faces an important offseason with the quarterback situation at the forefront and other salary cap issues. Hurts has played well in two games and shown plenty of potential. Wentz’s $128 million, four-year contract kicks in next year so trading him requires absorbing a significant cap hit. He’s also paid too much to be a backup.

Whomever ends up taking the snaps in 2021, Pederson will be ready to coach them.