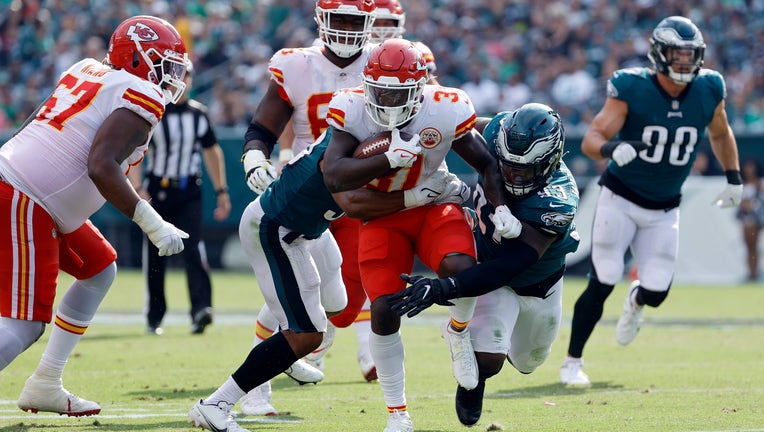 PHILADELPHIA, PENNSYLVANIA - OCTOBER 03: Darrel Williams #31 of the Kansas City Chiefs runs the ball during the third quarter against the Philadelphia Eagles at Lincoln Financial Field on October 03, 2021 in Philadelphia, Pennsylvania. (Photo by Tim

Andy Reid returned to Philadelphia and earned his 100th career win with the Chiefs, becoming the first coach in NFL history to win 100 games with two teams. Reid’s 140 victories with the Eagles are the most in franchise history.

Jalen Hurts threw for a career-high 387 yards and two TDs but Philadelphia (1-3) couldn’t keep up with Kansas City’s high-powered offense. The Eagles had three touchdowns negated by penalty and settled for field goals three times inside the red zone.

The two-time defending AFC champion Chiefs (2-2) snapped a two-game losing streak after entering with a losing record for the first time since they were 4-5 in 2015.

Mahomes tossed TD passes underhanded, overhanded and shoveled one on Kansas City’s three possessions in the first half. He finished with 278 yards passing and his interception was the only possession the Chiefs didn't score a TD. Hill had 11 catches for 186 yards.

Mahomes flipped a 1-yard TD pass underhanded to Clyde Edwards-Helaire for a 7-3 lead in the first quarter.

He threw a normal 6-yard TD pass to Hill to give the Chiefs a 14-10 lead. Mahomes set up the score a few plays earlier on first-and-20 from the 42 with a beautiful 32-yard pass to Hill, who made an excellent over-the-shoulder, fingertip catch near the sideline.

His 2-yard shovel pass to Jody Fortson increased Kansas City’s lead to 21-13 with under a minute left in the first half.

Darrel Williams ran in from the 1 to extend the lead to 28-16 but the Eagles answered with Kenneth Gainwell’s 7-yard TD run to get within 28-23.

Mahomes then connected with Hill on TD passes of 12 and 44 yards.

Hurts completed his first three passes for 56 yards on the opening drive but overthrew Zach Ertz in the end zone and the Eagles settled for Jake Elliott’s 29-yard field goal.

Late in the second quarter, Hurts missed Greg Ward open in the end zone after a 6-yard TD pass to Dallas Goedert was nullified by a penalty on left tackle Andre Dillard for being ineligible downfield. Elliott ended up hitting a 25-yarder.

A 3-yard TD pass from Hurts to Ertz in the third quarter was negated by an offensive pass interference penalty on J.J. Arcega-Whiteside so Elliott kicked a 31-yarder.

DeVonta Smith later caught a 34-yard TD pass but he stepped out of bounds. The Eagles then couldn’t convert on fourth down.

Smith caught seven passes for a career-high 122 yards. Smith, the 2020 Heisman Trophy winner with the 10th overall pick in the NFL draft, had 115 yards receiving in the first three games combined.

Three-time All-Pro tight end Travis Kelce improved to 3-0 against his older brother, three-time All-Pro center Jason Kelce. Travis had only four catches for 23 yards but his acting skills were on display when he waved his arms, pretending to not know the play right before the snap on Mahomes’ shovel TD pass.

Jason Kelce made his 109th consecutive start. He was the only member of Philadelphia’s starting offensive line who played after right tackle Lane Johnson was scratched due to a "personal" matter.

LeSean McCoy was honored by the Eagles after he officially retired on Friday. McCoy spent his first six seasons in Philadelphia from 2009-14 and finished as the franchise’s all-time leader in yards rushing with 6,792. McCoy was a two-time All-Pro, six-time Pro Bowl pick and was a member of Super Bowl championship teams each of the past two seasons.

Chiefs: Host the Buffalo Bills on Sunday in a rematch of last season’s AFC championship game.