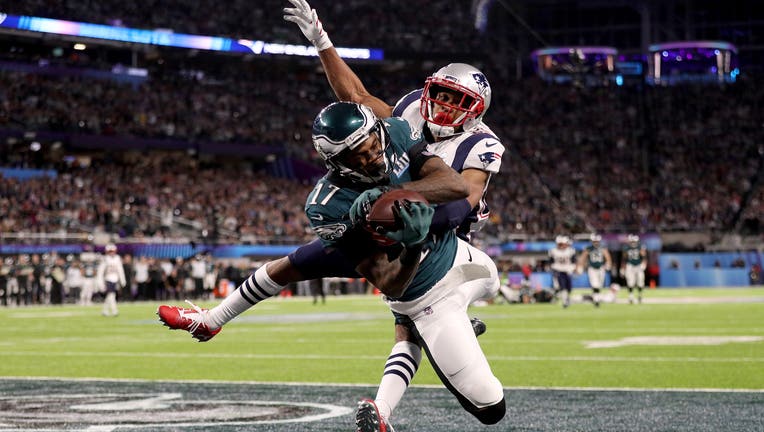 Alshon Jeffery #17 of the Philadelphia Eagles catches a 34 yard pass, over Eric Rowe #25 of the New England Patriots, for a touchdown during the first quarter in Super Bowl LII at U.S. Bank Stadium on February 4, 2018 in Minneapolis, Minnesota. (Phot

PHILADELPHIA - The Philadelphia Eagles will reportedly be parting ways with another member of their receiving corps when the new league year begins.

NFL Network's Ian Rapoport reported Monday that the team would be releasing Alshon Jeffrey when the league year begins next month.

Jeffrey has been with the Eagles since 2017, when he helped the Eagles win their first Super Bowl in franchise history.

The former Chicago Bear reeled in nine touchdown passes during the 2017 season and finished with 789 receiving yards. He also had three catches, including a touchdown in the Eagles Super Bowl victory over the New England Patriots, despite a shoulder injury that required offseason surgery.

Jeffrey, 31, had another productive year in 2018 before injuries limited his playing time and production in the following two seasons.

The Eagles appear undergoing a youth movement at the receiver position this upcoming season with DeSean Jackson's release also becoming official on Monday.

Last offseason the team selected three receivers in the 2020 NFL Draft and could look to add more depth to the position in the upcoming draft, when the team will have the sixth overall selection.