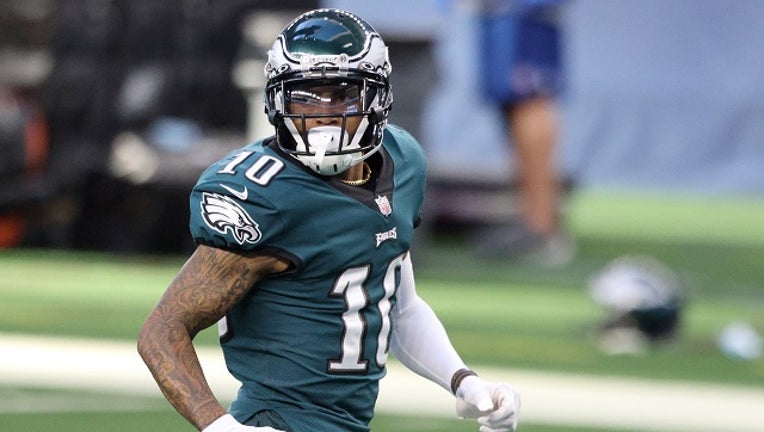 DeSean Jackson #10 of the Philadelphia Eagles runs after a catch for a touchdown in the first quarter against the Dallas Cowboys at AT&T Stadium on December 27, 2020 in Arlington, Texas. (Photo by Ronald Martinez/Getty Images)

PHILADELPHIA - The Philadelphia Eagles announced Friday they have released wide receiver DeSean Jackson from the team.

Jackson, 34, posted a goodbye message on his Instagram story saying that he’s looking forward to the next chapter and thanked Philadelphia.

He was the 49th pick in the 2008 NFL Draft  The three-time Pro Bowl wide receiver returned to the Birds in 2019 after being released in 2013. He spent three seasons in Washington and two in Tampa Bay.

Jackson was due $9 million in non-guaranteed salary this upcoming season.

The news comes a day after the Eagles reportedly agreed to trade quarterback Carson Wentz to the Indianapolis Colts in exchange for two draft picks.

ESPN's Adam Schefter reports the Eagles will receive a 2021 third-round pick and a conditional 2022 second-round pick that could turn into a first-round pick for Wentz.