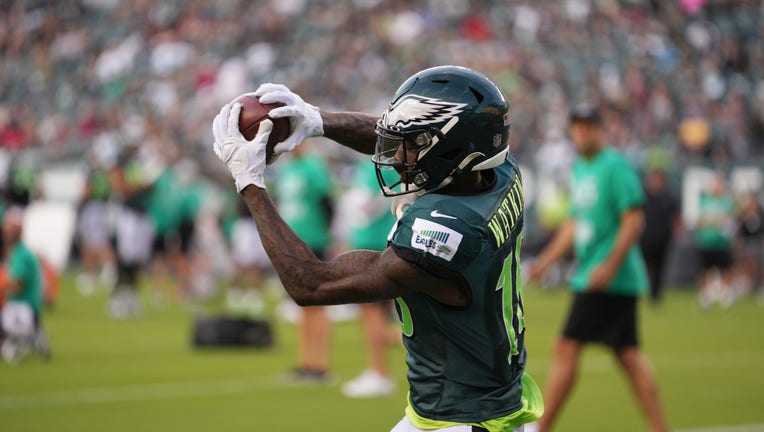 PHILADELPHIA - Quez Watkins, the lowest pick of five wide receivers drafted by the Philadelphia Eagles over the past three years, has stood out the most this summer.

The 2020 sixth-round pick carried his impressive training camp into the preseason opener, catching a bubble screen from Joe Flacco and turning it into a 79-yard touchdown in a 24-16 loss to Pittsburgh on Thursday night. Watkins also raced past a defender but couldn’t catch up to an overthrow by Jalen Hurts that could have been a 98-yard TD.

"He isn’t a secret anymore so that’s unfortunate," Hurts said of Watkins. "That’s not the first time I’ve seen him take one of those screens. ... I think he’s a great player. He knows what I think of him and he could be a really good player for us. This game is no representation of what he’s been doing and the progress he’s made from last year."

The speedster ran a 4.35 40-yard dash before the Eagles selected him out of Southern Mississippi with the 200th overall pick. He played sparingly as a rookie, finishing with seven catches for 106 yards and one TD.

If you're heading to an Eagles or Phillies game you must mask up indoors regardless of vaccination status.

The Eagles drafted J.J. Arcega-Whiteside in the second round in 2019 and Jalen Reagor in the first round last year. They also took John Hightower in the fifth round in 2020. Philadelphia traded up to choose Heisman Trophy winner DeVonta Smith with the 10th overall pick in April but he’s been sidelined by a knee injury after a strong start.

Watkins has made the most of his opportunity.

"He got behind the defense on the one, made the run after a catch, and that’s what you look for. Now we just want to see him separate in the intermediate game, too, and then you would’ve seen all three — but excited about his development."

Watkins got a major confidence boost in camp when cornerback Darius Slay said he could be one of the team’s best wideouts.

"It means a lot," Watkins said. "Slay is a big-time vet, big-time corner."

Most of the focus regarding Philadelphia’s wide receivers corps surrounds Smith, who was a superstar at Alabama. Arcega-Whiteside hasn’t developed and Reagor had an injury-plagued, inconsistent rookie year. Watkins won’t be overlooked anymore.

FOX 29's Jenn Frederick meets up with former Eagles player Ike Reese as he signs autographs for the families in attendance ahead of Sunday's 1st public practice.

Watkins was determined to improve after his first year.

The Eagles haven’t had a wide receiver surpass 1,000 yards receiving since Jeremy Maclin had 1,318 in 2014. Smith has the potential but Watkins is making a strong case for more playing time, too.