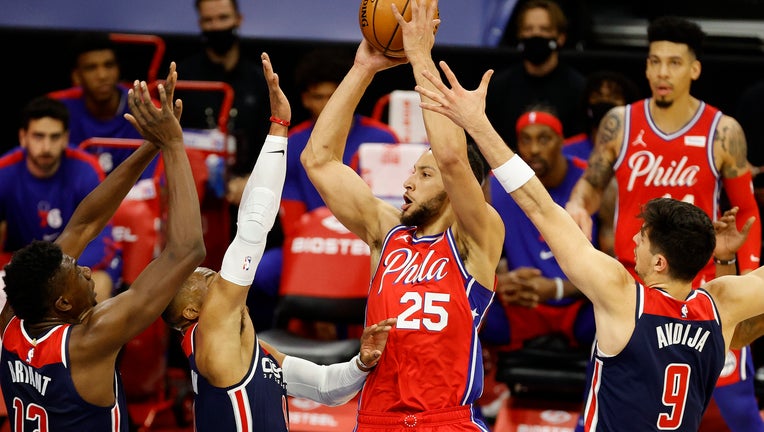 PHILADELPHIA - Joel Embiid scored the go-ahead basket with 1:09 left and had 29 points and 14 rebounds to lead the Philadelphia 76ers to a 113-107 win over Washington on Wednesday night and spoil Russell Westbrook’s triple-double Wizards’ debut.

Westbrook and Bradley Beal were fantastic in the backourt in the opening-night paring that nearly handed 76ers coach Doc Rivers a loss in his Philadelphia debut. Westbrook had 21 points, 15 assists and 11 rebounds to wow the Wizards after he was acquired in the big deal that sent former cornerstone John Wall to the Houston Rockets. Beal, a two-time All-Star who was second in the league in scoring last season, had 31 points.

The Sixers made their major change on the bench, hiring Rivers to replace Brett Brown and wake up a team that was swept out of the first round of the playoffs last year and help lead the franchise to their first title since 1983.

He has to find a way to make the Embiid-Ben Simmons pairing work — two All-Stars who have yet to get the most of their prodigious talents and have frustrated fans with their flaws.

Embiid and Shake Milton, who scored 19 points off the bench, were the go-to scorers late, and Simmons sealed the win with a monster dunk in the waning moments. Simmons had 16 points — one less than Embiid scored in the fourth.

Wizards: Israeli teen Deni Avdija started in his NBA debut for the Wizards. The 19-year-old was the ninth overall pick in the draft and had played for the Tel Aviv Maccabi club in Israel’s Premier League. "I know he’s only 19 years old but he plays with a passion, plays with a determination that I like," Brooks said. When Avdija expressed disappointment he’d debut in front of no fans, Brooks quipped, "count yourself lucky you don’t have to deal with the Philadelphia fans."

76ers: Before the game, Rivers said the season opener remained perhaps his favorite night in the NBA. "I love it. I love my job," he said. "I swear, the day I don’t is the day I’m out."

TNT analyst Charles Barkley played with Brooks and roomed with him, too, when they played for the 76ers. Barkley put some pressure on his old teammate when he predicted the Wizards would make the playoffs.

"I’ll tell you what, he’s guaranteed a lot and very rarely it comes through," Brooks said. "My job is to take care of my former roommate and pay him back. He didn’t charge me rent for two months. Hopefully, we can have a good year and make the playoffs. I like our chances. I like the group that I’m with."

"I hope Charles is right on that guar-an-tee," Brooks said.

The 76ers had drummers, the cheer team held signs that read "Make Some Noise," a DJ blasted music and the mascot Franklin roasted the Wizards with humorous signs to liven up an empty Wells Fargo Center.