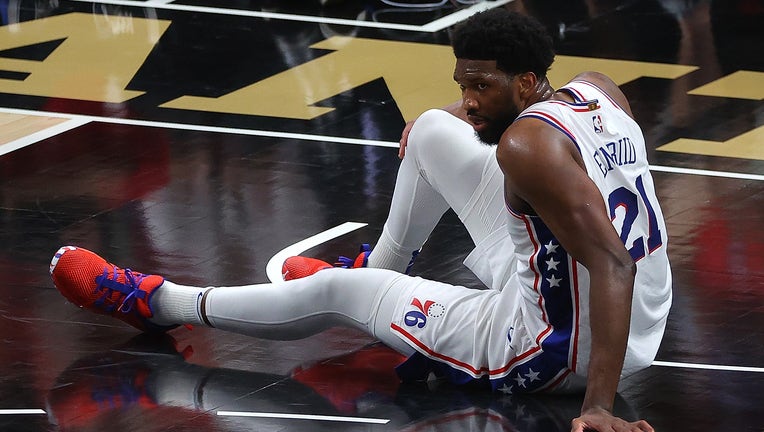 ATLANTA, GEORGIA - JUNE 14: Joel Embiid #21 of the Philadelphia 76ers reacts after a turnover against the Atlanta Hawks during the second half of game 4 of the Eastern Conference Semifinals at State Farm Arena on June 14, 2021 in Atlanta, Georgia. NO

PHILADELPHIA - Joel Embiid and the 76ers barely have a leg to stand on. Embiid can’t jump. He can’t get any lift in his shots -- notable in a blown layup that should have won Game 4 -- and couldn’t make any buckets in the second half.

So, now, are the top-seeded Sixers.

Embiid continues to suit up and play through torn cartilage in his right knee -- admirably, perhaps -- but at the point of diminishing returns for the Sixers. The big man is hurting as the Sixers return home Wednesday for Game 5 against the Atlanta Hawks. Embiid and Ben Simmons’ failures in Game 4 keyed the Sixers collapse down the stretch and let the Hawks pull away with the win and tie the series 2-2.

The Western Conference semifinals between the Utah Jazz and Los Angeles Clippers. The Jazz return to Salt Lake City with their young star Donovan Mitchell playing with a sore right ankle and all the momentum in the series now with the Clippers. Los Angeles dominated Utah in in Game 3 and Game 4 in California.

A day off could help Mitchell more than Embiid.

The 76ers leader spent time in the locker room in the second quarter Monday and was 0-for-12 from the field in the second half. With the 76ers trailing 101-100, Embiid missed an easy look on a layup that he normally would have dunked home for the go-ahead bucket.

He finished with 17 points and 21 rebounds.

"I’m just trying to do the best I can," Embiid said after the game.

The All-Star center wasn’t the only slumping against Atlanta: the 76ers blew a 13-point halftime lead, made only four baskets -- four! -- in the fourth quarter, and scored only 38 points in the second half.

It’s hardly a resume worthy of the East’s top seed.

The Sixers took a day off from practice Tuesday and kept it to a Game 4 film session. The review was ugly. Coach Doc Rivers said a case of "hero ball" popped up where players tried to win the game instead of passing to open players. Rivers said almost every possession down the stretch had a wide-open Sixer standing with his arms raised calling for the ball, all while it went somewhere else.

Rivers said Embiid will be out there for Game 5.

"We wouldn’t put Joel out there if he couldn’t play," Rivers said Tuesday. "I’ll take what we have. I have no concerns."