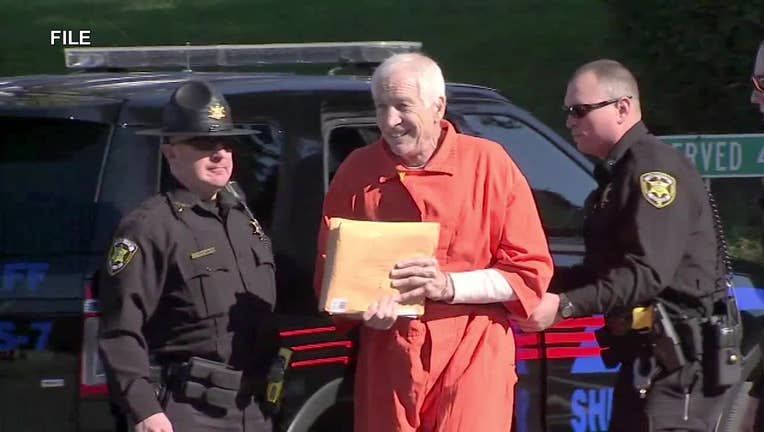 Pennsylvania Attorney General Josh Shapiro said in a release that Spanier “turned a blind eye to child abuse by not reporting his knowledge of Jerry Sandusky’s assaults to law enforcement.”

A federal magistrate judge in April 2019 threw out Spanier's conviction a day before he was to turn himself in to begin serving a jail sentence of two months, followed by two months of house arrest. The judge gave prosecutors three months to retry Spanier, but that has been on hold during the appeal.

U.S. Magistrate Judge Karoline Mehalchick in Scranton, Pennsylvania, had agreed with Spanier that he had been improperly charged under a 2007 law for allegations that dated to 2001.

Prosecutors had argued the 1995 and 2007 versions of the law encompassed and criminalized the same conduct.

Jerry Sandusky resentenced to 30 to 60 years in prison

U.S. Circuit Judge Mike Fisher, joined by two others, wrote in the opinion released Tuesday that Spanier’s due process rights would only be violated if the state Superior Court’s ruling against him that upheld his conviction had been an “‘unexpected and indefensible’ interpretation of the child endangerment statute in light of prior law.”

“We conclude that it was not,” wrote Fisher, a former Pennsylvania attorney general and state senator.

Spanier was forced out as university president shortly after Sandusky was arrested in 2011 on child molestation charges. A year later, Spanier was himself accused of a criminal cover-up, although many of those counts were later thrown out. A jury acquitted him of what remained, except for the single count of child endangerment.

Spanier remains a tenured faculty member on administrative leave and is not teaching, a university spokesperson said Tuesday.

Graduate assistant Mike McQueary told Spanier's lieutenants he had seen Sandusky abusing a boy late on a Friday night in a team shower.

Spanier, 72, has said the abuse of the boy, who has not been conclusively identified by authorities, was characterized to him as horseplay.

Former Penn State athletic director Tim Curley and former university vice president Gary Schultz agreed to notify The Second Mile, the charity for at-risk youth where Sandusky met many of his victims, but not to call police.

Spanier gave his approval, writing in an email that was cited in Fisher's decision that “the only downside for us is if the message isn’t ‘heard’ and acted upon, and we then become vulnerable for not having reported it.”

Curley and Schultz both pleaded guilty to misdemeanor child endangerment and testified for the prosecution. Both have since served similar jail sentences.

Spanier did not testify at his trial and told the judge at sentencing that he regretted not intervening more forcefully.

Sandusky has lost a string of appeals and is serving a lengthy state prison sentence.