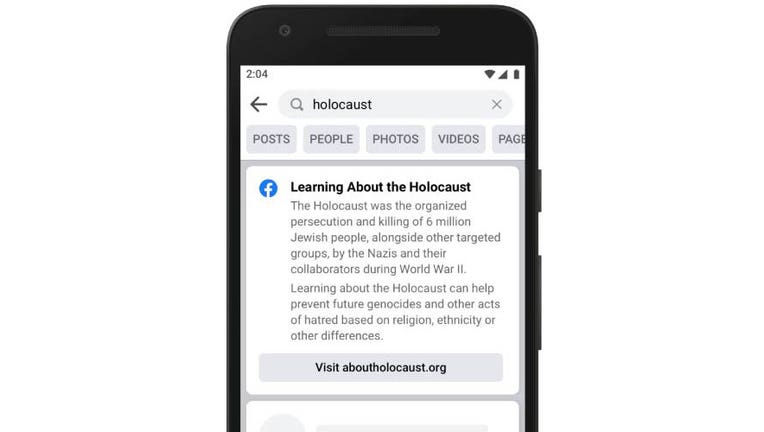 SAN FRANCISCO - Facebook is working to combat Holocaust denial by adding a new fact-checking tool that appears when users search for Holocaust-related terms. The move is part of an effort by the company to take action against conspiracy theories and misinformation on the platform amid criticism that it isn’t doing enough.

Anyone who searches on Facebook for terms related to the Holocaust or Holocaust denial will see a message labeled "Learning About the Holocaust," which includes a link to read credible information about the Nazi genocide during World War II.

The link directs users to aboutholocaust.org, created by the World Jewish Congress with the support of the United Nations Educational, Scientific and Cultural Organization (UNESCO). The site shares facts about the Holocaust and survivor testimonies, which have been reviewed by experts in the field of Holocaust studies.

The new pop-up tool was announced on International Holocaust Remembrance Day, a worldwide memorial day on Jan. 27 to commemorate the end of the tragedy of the Holocaust and to develop educational programs to help prevent future genocides.

The United Nations General Assembly designated the day to coincide with the anniversary of the liberation of Auschwitz-Birkenau concentration camp.

"We remember the lives of the six million Jews who were systematically persecuted and killed, alongside members of other minority groups, by the Nazis and their collaborators during the Holocaust," Facebook said in a post about the new tool. "We honor the memories of the victims and recognize the role we can play to help fulfill the promise ‘Never Again.’"

Facebook said the fact-checking tool will first be available in English speaking countries, including Australia, New Zealand, Canada, the U.K., Ireland and the U.S. It will expand to more languages and countries in the coming months.

The social media giant has faced intense scrutiny in recent years for not taking enough action against hate speech and disinformation on its platform. In October, Facebook banned posts that deny or distort the Holocaust.

Krispy Kreme owners to give millions to Holocaust survivors

One of Germany’s richest families is giving millions to support Holocaust survivors as it seeks to make amends for its use of forced laborers during the Nazi era.

But according to a recent report from the Anti-Defamation League (ADL), the platform is "still struggling to address antisemitism and Holocaust denial effectively."

The organization, which fights antisemitism, issued a report card grading several social media platforms on these efforts, and gave Facebook and Instagram a "D," along with Discord, Reddit and Steam. Twitch received a "B," while Twitter, YouTube, Roblox and TikTok earned "Cs" for their efforts.

A survey taken in September found that 49% of American adults under 40 had been exposed to Holocaust denial or distortion across social media.

"In recent years, content denying the Holocaust has appeared on an array of social media platforms, largely because those companies have not been nimble enough or taken the issue seriously," said ADL CEO Jonathan A. Greenblatt. "While some platforms have finally stepped up their efforts to stop the amplification of denial, others are still struggling to address antisemitism and Holocaust denial effectively.

"This is truly shameful at a time when antisemitic conspiracy theories are spreading globally, some outrageously based on the big lie that the Holocaust never happened," Greenblatt added.

The American Jewish Committee, which Facebook credited as a partner in developing the new Holocaust educational tool, called it a "proactive step."

"The new pop-up treatment is a proactive step by Facebook for truthful Holocaust education. But the priority remains ensuring that Holocaust denial is entirely taken down from Facebook," David Harris, American Jewish Committee CEO, said in a statement.