New York City Mayor Bill de Blasio announced an incentive for residents to get the COVID-19 booster vaccine. From now until the end of the year at city run vaccine hubs, residents will get $100 in their bank accounts for getting the vaccine booster.

WASHINGTON - The U.S. Food and Drug Administration has authorized Pfizer’s COVID-19 vaccine booster for 12- to 15-year-olds.

The expanded approval is an important step in clearing the extra shots for the younger age group. The U.S. Centers for Disease Control and Prevention must still sign off on the initiative before they are administered.

Last month, U.S. health authorities approved boosters of the COVID-19 vaccine for everyone 16 and older. The FDA said Monday that everyone 12 and older eligible for a booster can get one as early as five months after their last dose rather than six months.

Vaccines still offer strong protection against serious illness from any type of COVID-19. But health authorities are urging everyone who’s eligible to get a booster dose for their best chance at avoiding milder breakthrough infections from the highly contagious omicron mutant.

Children tend to suffer less serious illness from COVID-19 than adults. But child hospitalizations are rising during the omicron wave – most of them unvaccinated.

Boosters are important considering that protection against infection wanes over time and "we’re facing a variant that has the potential to require more immunity to be protected," Dr. Rochelle Walensky, the director of the Centers for Disease Control and Prevention, previously told The Associated Press. 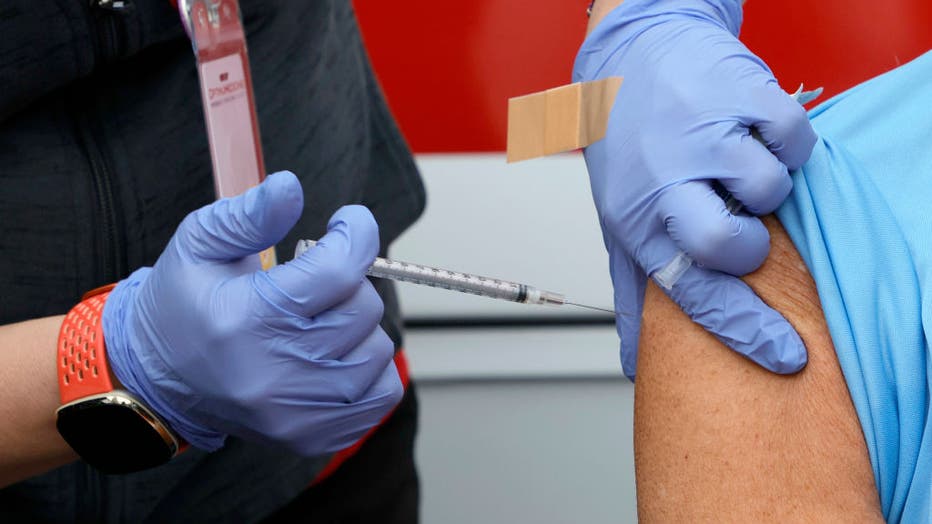 The Pfizer vaccine is the only option in the U.S. for anyone younger than 18, either for initial vaccination or for use as a booster. Vaccinations for children as young as 5 just began last month, using special low-dose Pfizer shots.

The decision to extend boosters to 16- and 17-year-olds was complicated by the fact that the Pfizer shot — and a similar vaccine made by Moderna — has been linked to a rare side effect called myocarditis. It’s a type of heart inflammation seen mostly in younger men and teen boys.

The FDA said rising COVID-19 cases in the U.S. meant the benefits of boosters greatly outweighed the potential risk from the rare side effect, especially as the coronavirus itself can cause more serious heart inflammation.

The older teens, 16- and 17-year-olds, became eligible for boosters in early December. But original vaccinations opened for the younger teens, those 12 to 15, back in May. That means those first in line in the spring, potentially millions, are about as many months past their last dose as the slightly older teens.

As for even younger children, kid-size doses for 5- to 11-year-olds rolled out more recently, in November -- and experts say healthy youngsters should be protected after their second dose for a while. But the FDA also said Monday that if children that young have severely weakened immune systems, they will be allowed a third dose 28 days after their second. That’s the same third-dose timing already recommended for immune-compromised teens and adults.

Pfizer is studying its vaccine, in even smaller doses, for children younger than 5.

Meanwhile, COVID-19 cases have continued to climb more than a year after the vaccine was rolled out. New cases of COVID-19 in the U.S. have soared to their highest level on record at over 265,000 per day on average, a surge driven largely by the highly contagious omicron variant.

New cases per day have more than doubled over the past two weeks, eclipsing the old mark of 250,000, set in mid-January, according to data kept by Johns Hopkins University.

The fast-spreading mutant version of the virus complicated Christmas and New Year’s plans, forcing communities to scale back or call off their festivities just weeks after it seemed as if Americans were about to enjoy an almost normal holiday season. Thousands of flights have been canceled amid staffing shortages blamed on the virus.

The picture is grim elsewhere around the world, especially in Europe, with World Health Organization chief Tedros Adhanom Ghebreyesus saying he is worried about omicron combining with the delta variant to produce a "tsunami" of cases. That, he said, will put "immense pressure on exhausted health workers and health systems on the brink of collapse."

The number of Americans now in the hospital with COVID-19 is running at around 60,000, or about half the figure seen in January, the CDC reported.

While hospitalizations sometimes lag behind cases, the hospital figures may reflect both the protection conferred by the vaccine and the possibility that omicron is not making people as sick as previous versions.

Public health experts will be closely watching the numbers in the coming week for indications of the vaccines’ effectiveness in preventing serious illness, keeping people out of the hospital and relieving strain on exhausted health care workers, said Bob Bednarczyk, a professor of global health and epidemiology at Emory University.

CDC data already suggests that the unvaccinated are hospitalized at much higher rates than those who have gotten inoculated, even if the effectiveness of the shots decreases over time, he said.

"If we’re able to weather this surge with hopefully minimal disruptions to the overall health care system, that is a place where vaccines are really showing their worth," Bednarczyk said.

WHO reported that new COVID-19 cases worldwide increased 11% last week from the week before, with nearly 4.99 million recorded Dec. 20-26. But the U.N. health agency also noted a decline in cases in South Africa, where omicron was first detected just over a month ago.