In the first vote of its kind since the coronavirus outbreak, voters statewide will decide twin constitutional amendments that would give lawmakers much more power over disaster declarations, to apply whether the emergency is another pandemic or natural disaster.

HARRISBURG - Republican lawmakers across the country have tried to roll back the emergency powers that governors wielded during the COVID-19 pandemic, as they ordered businesses shut, mask-wearing in public and students home for distance learning.

Pennsylvania’s Legislature is now taking its case to the ballot.

In the first vote of its kind since the coronavirus outbreak, voters statewide will decide twin constitutional amendments that would give lawmakers much more power over disaster declarations, to apply whether the emergency is another pandemic or natural disaster.

The questions were placed on Tuesday’s primary ballot by the Republican-controlled Legislature, which has had a long-running feud with the state’s Democratic governor over his emergency actions during the pandemic.

"This is the first opportunity we actually have something tangible, where more than just a handful of sampled people will be able to have an input," said Jonathon Hauenschild, an attorney at the American Legislative Exchange Council, an association of conservative lawmakers and businesses.

Pennsylvania plans to rollback most COVID-19 restrictions on Memorial Day

For Republican lawmakers in Pennsylvania, asking voters to change the Constitution is the only way they have of reeling in the authority of Democratic Gov. Tom Wolf. He has veto power, and Republicans don’t have a large enough majority to override his actions.

Democratic lawmakers have largely stuck with Wolf, and courts rejected attempts to end the governor’s disaster declaration or lift his orders.

The amendments on Tuesday’s ballot would cause such a significant erosion of executive authority that Wolf and his emergency disaster director have called it reckless and a threat to a functioning society.

"Both of these questions undermine our democracy," Wolf said Wednesday during a news conference at a fire station in suburban Harrisburg. "They take away our ability to respond to emergencies."

The questions ask voters to end a governor’s emergency disaster declaration after 21 days and to give lawmakers the unilateral authority to extend or end it with a majority vote.

Current law allows a governor to issue an emergency declaration for up to 90 days and extend it without limit. The constitution requires a two-thirds majority vote by lawmakers to end the declaration.

The proposals emerged from the Republican-controlled Legislature last summer, amid deep frustration over Wolf extending broad shutdowns of business activity beyond a few weeks, as Pennsylvania endured the first of what would become three spikes in COVID-19 cases. More than 26,000 Pennsylvanians have succumbed to the virus, according to state figures. 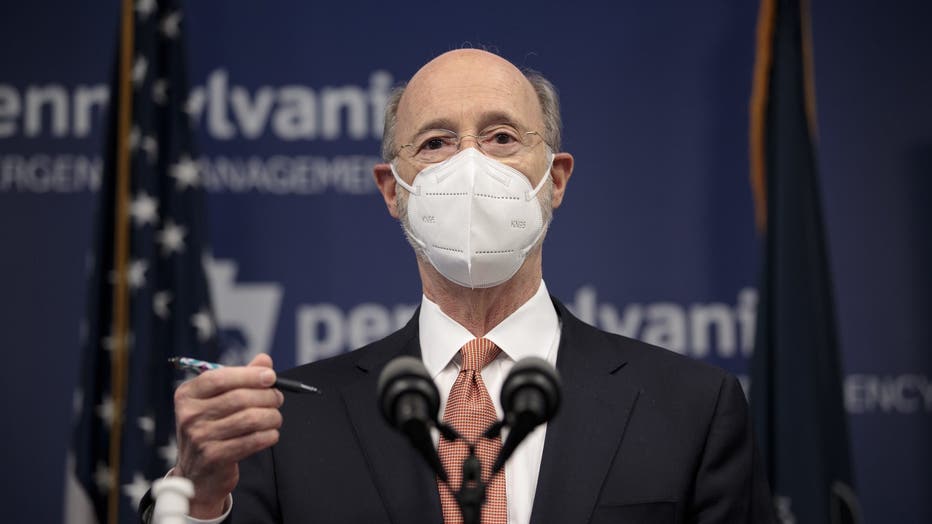 "We want to give any governor time to declare a disaster emergency and get started with what needs to be started with. And after 21 days, it doesn’t mean a state of emergency is going to end. It just means the Legislature has a seat at the table to work with him," said Senate Majority Leader Kim Ward, R-Westmoreland, who authored the legislation.

If turnout patterns in odd-year elections over the past decade hold, fewer than one-fifth of Pennsylvania’s registered voters will determine the outcome.

History is on Republicans’ side. The last time voters rejected a ballot question was in 1993, according to information provided by the state.

Since then, voters have approved 19 straight ballot questions. They usually are bipartisan initiatives to expand borrowing authority or to amend the Constitution.

The questions that will appear on the ballot, however, are complicated, with wording written by the Wolf administration that Republicans say is politically charged and designed to make the questions fail.

The effect if voters approve them also is in dispute.

Republicans claim the governor cannot order shutdowns without a disaster emergency in effect. Wolf disagrees, saying a governor’s authority during a public health emergency rests on separate public health law and is unaffected by the ballot questions.

As a result, it may end up in court if, say, a variant causes another spike in cases.

Wolf administration officials have held news conferences to describe how they would be hamstrung from responding to emergencies and risk missing out on federal aid if a declaration were to end too soon.

The changes posed by Republican lawmakers would inject politics into disaster emergencies and risk lives if the Legislature were unable to meet to pass a resolution extending a disaster emergency, they say.

Republicans have accused Wolf of fear-mongering.

Pennsylvania will lift nearly all COVID-19 restrictions on Memorial Day, the Wolf administration announced Tuesday, promising to restore something approaching normalcy to the state more than a year into the pandemic and just in time for summer.

"I literally have five minutes to decide because if we’re going to help those people, I have to get the National Guard on to I-78 within an hour," Rendell said. "So there’s not enough time for the Legislature to discuss and debate."

State lawmakers across the U.S. have proposed more than 350 measures this year related to legislative oversight of executive actions during the COVID-19 pandemic or other emergencies, according to the National Conference of State Legislatures.

In at least dozen states, lawmakers have passed measures asserting their own power to review, halt or reverse executive actions taken during emergencies. In several states, Republican-controlled legislatures have overridden vetoes.

"There is a bipartisan, nationwide reckoning taking place right now about how much power any governor or any General Assembly should wield during an emergency," Pennsylvania state Sen. David Argall, R-Schuylkill, said on the Senate floor earlier this week as he argued in favor of the constitutional amendments.

"We elect governors in Pennsylvania," he said. "We don’t elect kings."

Besides messaging by Wolf and lawmakers, the campaign in Pennsylvania has mostly revolved around cable TV ads, fliers, billboards, lawn signs and digital ads costing hundreds of thousands of dollars from a pair of Harrisburg-based organizations whose issue advocacy aligns with Republicans.

The groups’ fliers urging a "yes" vote have reached mailboxes across the state, often with stock photos of smiling Black people while linking support for the two questions with support for a separate question on the ballot to amend the constitution to outlaw discrimination because of race or ethnicity.

"Preserve our local communities. Protect our schools and our children’s education. Ensure equality for all Pennsylvania families," says one.

The chair of Pennsylvania’s Legislative Black Caucus, state Rep. Donna Bullock, D-Philadelphia, accused the fliers’ sponsors of a misinformation campaign that suggests that supporting equality "also means risking lives and destroying the existing checks and balances against any governor’s ability to declare a disaster."

Pennsylvania’s primary will take place as COVID-19 cases have fallen after a spring spike and the vaccine is returning some aspects of life to normal.

Masking orders remain in effect, and capacity restrictions are scheduled to lift on Memorial Day.

There is scant public polling in recent months on the governor’s public approval or his handling of the pandemic. That, combined with the confusing wording of the amendment questions, esoteric subject matter, expected low turnout and a highly partisan atmosphere make the result unpredictable.

"If Pennsylvania is successful," said Hauenschild, of the American Legislative Exchange Council, "I look for more legislatures to start examining how to bypass a governor."