Felicidad Garcia thought she had a ticket on her car last Saturday, but instead, a kind note was left.

PHILADELPHIA - A Philadelphia mom is paying it forward after someone from the PPA gave her a break instead of a ticket.

If you drive in Philadelphia, it’s likely you’ve been visited by a Philadelphia Parking Authority ticket.

"We saw that envelope that gets your heart going. I’m like, I got a ticket," Felicidad Garcia said.

Garcia, who is a mom of two, thought she had a ticket on her car last Saturday, but instead, a kind note was left by the PPA. 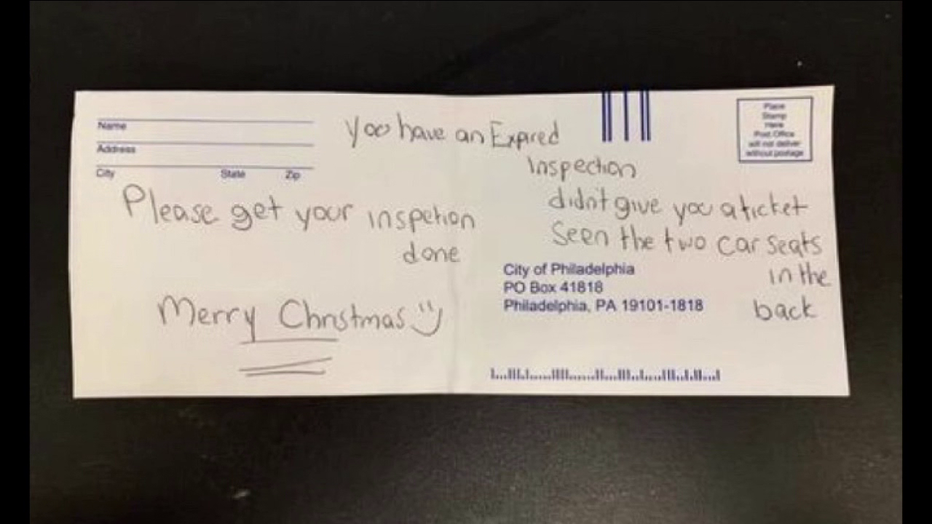 "On the envelope, it was actually a note that said not a ticket! Did not give you a ticket, seen the two car seats in the back, Merry Christmas, please get your inspection redone," Garcia explained.

She adds she didn't even realize that her inspection had expired.

"Oh man, I didn’t even realize (it) it’s been out since October. I was like way past. I just lost track, I wasn’t like trying to put it off. I just forgot," said Garcia.

She posted her good fortune on a local neighborhood Facebook page where someone said she should pay to forward. That's exactly what she did.

"Somebody suggested to walk around the block and put like reminders under their windshield wipers to say, hey your inspections expired or is going to expire," she said.

In a matter of seconds, another car was left a friendly reminder that just might save them from a ticket in the future.