LAKE BUENA VISTA, Fla. - This Florida mom rung in the first day of school by visiting Walt Disney World after dropping her kids off.

Lisa DiNoto Glassner, a Florida mom who lives just a mile from the theme parks, has two boys. She dropped them off at school on for their first day back and then headed to Magic Kingdom.

"We live super close. We're like a mile from the castle. I can see the fireworks. So, it's not that crazy for me to just pop in for a few hours," Lisa told Fox 35 during Good Day Xtra. "Like, I could have gone home and done the laundry, but I was like, you know what? I'm taking a moment and I'm going to take a walk in Magic Kingdom." 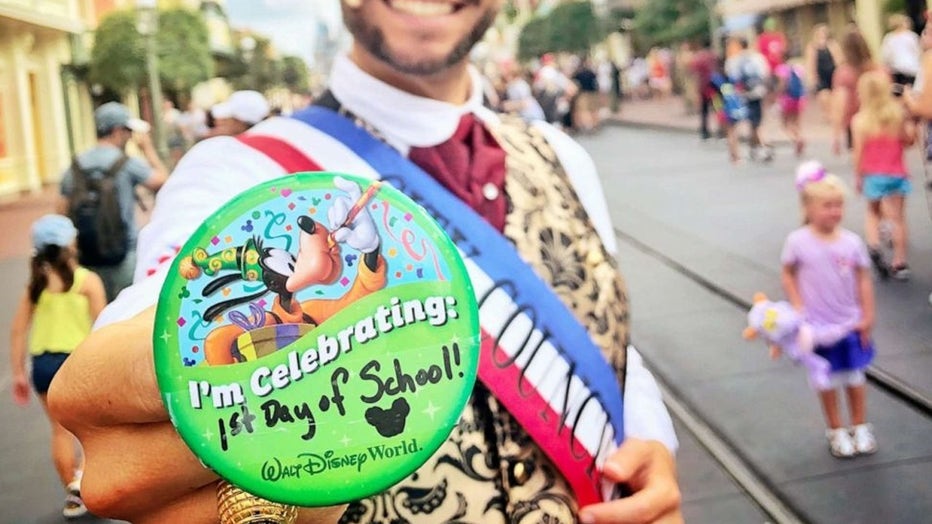 Lisa told Fox 35 that the characters loved it. She said that "At first, I walked in and was just going to do a shot myself. And then I saw the citizens of Main Street on Main Street and was like well 'maybe I'll have them hold the pin.' And then I saw the Fairy Godmother and it was all over -- we just connected on another level."

Lisa said that the Fairy Godmother "just got it immediately. We were both crying and laughing."

Her boys, who are ages six and eight, did not know that she went to Magic Kingdom until they talked later that night. Lisa said that "they got a kick out of it" and that even her husband is "amused."

Lisa, who has a law degree from Harvard University, moved to Florida after living and working as a lawyer in the northeast. She told Fox 35 that "some people are thrilled in it, but it was not fulfilling me quite enough to be taking my whole life. So, we just walked away from it and we're re-writing life from scratch. And now we live just north of Magic Kingdom and it's home."