The community gathered Monday night to remember 16-year-old Kaylin Johnson, who was killed in a triple shooting last week.

PHILADELPHIA - Friends and family honored the life of the boy they knew as K.J. after he was killed in a triple shooting last week.

"Forever K.J." the crowd chanted as they released balloons in memory and honor of 16-year-old Kaylin Johnson outside his school Boys' Latin Charter. Many were here with heavy hearts.

"I really don't know what to do next. From the day I gave birth to K.J. It’s been all about K.J.," said his grieving mom.

K.J. played basketball and football for the school.

"On the days he would come to practice he always wore a bright color, bright yellow or a bright orange. Everybody could see K.J. a mile away," said one of his coaches. 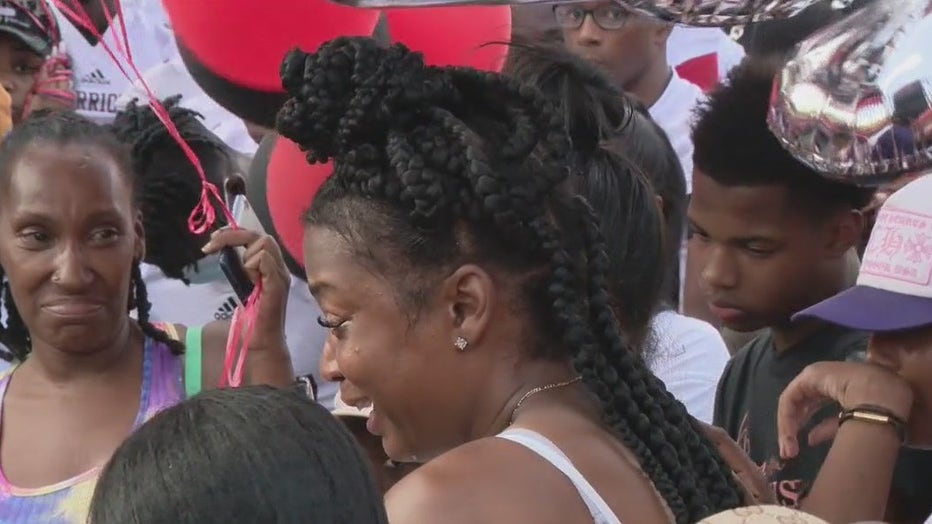 Santina Norman says she's known K.J. since he was in second grade. He used to be her neighbor and her son's first childhood friend.

He and K.J. were friends.

"I feel like this happened to me all over again it just brings back memories," said Pratt.

"Tahir was a good guy. KJ was a good guy and they got killed for what? Because somebody had a gun and they thought they were big?" said Deborah Marshall, Tahir’s aunt.

At the same time as the balloon release,  a community meeting on gun violence was happening at Tabernacle Lutheran Church in West Philly.

"This is an opportunity to own our own neighbors and say this is how we feel these issues need to be addressed," said Kirsten Britt with Sayre Health Center the group that organized the meeting.

Another family is also grieving. KJ’s friend Tommie Frazier was with him and also shot to death. They were in a car with one other person when gunfire erupted. KJ’s mom says he was not the intended target and that they were headed to the YMCA.

'I lived for him': Mother of teen shot, killed in West Philadelphia left heartbroken