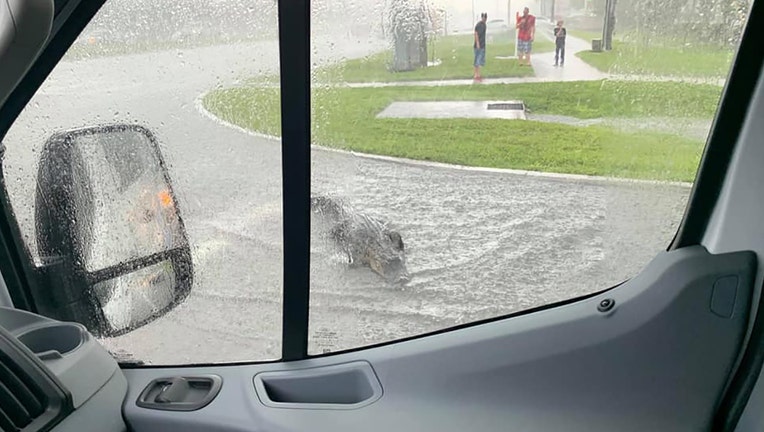 Alligator casually hanging out in the middle of a flooded roadway (Courtesy: Roger Light)

PINELLAS PARK, Fla. (FOX 13) - Consider this your friendly reminder to not play in puddles -- at least not in Florida. You never know who may join you!

Roger Light said he spotted this gator casually hanging out in the middle of a flooded roadway at the intersection of Gandy Blvd and Grand Ave in Pinellas Park on Thursday.

"I was wondering why people were out video taping in the pouring rain and people backing up in the right turn lane that the gator was in," Light wrote in a post on Facebook. "That’s when I saw it in passenger side coming towards me lol."

It was likely the same alligator that a bystander ended up pulling from the traffic lanes near the Wawa gas station.

Trappers were called to capture the hissing, twisting reptile in the thick grass along the busy road. The Florida Fish and Wildlife Conservation Commission said the 8-foot gator was ultimately removed from the area by a contracted trapper.