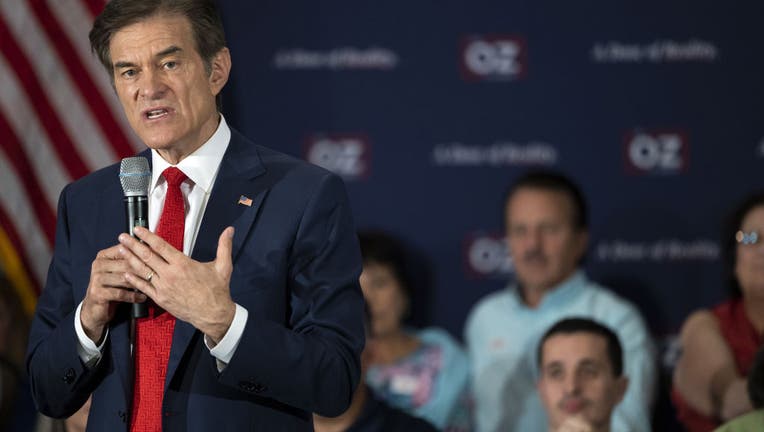 Mehmet Oz, celebrity physician and US Republican Senate candidate for Pennsylvania, speaks during a town hall in Bell Blue, Pennsylvania, US, on Monday, May 16, 2022. The late surge by Kathy Barnette, a pundit known for her strident commentary as wel

McCormick's lawsuit was filed late Monday, less than 24 hours before Tuesday's deadline for counties to report their unofficial results to the state.

In it, McCormick asks the state Commonwealth Court to require counties to obey a brand-new federal appeals court decision and promptly count mail-in ballots that lack a required handwritten date on the return envelope.

Oz, who is endorsed by former President Donald Trump, has pressed counties not to count the ballots and the Republican National Committee and state GOP said they would go to court to oppose McCormick.

In a statement, the RNC's chief counsel, Matt Raymer, said "election laws are meant to be followed, and changing the rules when ballots are already being counted harms the integrity of our elections."

Meanwhile, Tuesday, Gov. Tom Wolf’s administration issued guidance to counties saying that any ballots without dates must be counted, citing the 3rd U.S. Circuit Court of Appeals' decision from Friday.

But it also said counties should keep those ballots separate — an acknowledgment that lawyers for defendants in the federal appeals court case said they will appeal to the U.S. Supreme Court.

McCormick’s lawsuit is the first — but likely not the last — lawsuit in the contest between Oz and McCormick.

The race is close enough to trigger Pennsylvania’s automatic recount law, with the separation between the candidates inside the law’s 0.5% margin. The Associated Press will not declare a winner in the race until the likely recount is complete. That could take until June 8.

Oz and McCormick are vying for the nomination to take on Democratic nominee John Fetterman in a presidential battleground contest that is expected to be among the nation's most competitive races this fall. The seat is open because two-term Republican Sen. Pat Toomey is retiring, creating the Democrats' best opportunity to pick up a seat in the closely divided Senate.

It’s not clear how many mail-in ballots that lack a handwritten date have been received by counties. Although he trails the vote count, McCormick has been doing better than Oz among mail-in ballots.

In an appearance Monday on a conservative Philadelphia radio talk show, McCormick insisted "every Republican vote should count" and said his campaign believes the federal court decision is binding on counties.

Ruling in a separate case late Friday, the 3rd U.S. Circuit Court of Appeals said the state election law’s requirement of a date next to the voter’s signature on the outside of return envelopes was "immaterial." The lawsuit emerged from a county judicial election last year, and the three-judge panel said it found no reason to refuse counting the ballots in that race.

The ruling went against the position that Republicans in Pennsylvania have taken in courts repeatedly in the past to try to disqualify legal ballots cast on time by eligible voters for technicalities, such as lacking a handwritten date.

The state law requires someone to write a date on the envelope in which they mail in their ballots. However, the envelope is postmarked by the post office and timestamped by counties when they receive it.

The plaintiffs in the underlying judicial race say a handwritten date plays no role in determining whether a ballot is valid, cast on time "or any other important facet of the voting and tabulation process."