LOS ANGELES - A surge in avocado prices has forced some restaurant owners to turn to creative alternatives to traditional guacamole — most notably, “squashamole” made from a zucchini-like squash.

"This really does hurt," the Mexico City food and entertainment magazine Chilango said in a story about the "fake guacamole" recipes circulating on social media.

In truth, similar recipes have been circulating for years — a blended emulsion of tomatillo, zucchini, oil and chile — but they have gained greater visibility with the rise of avocado prices over the past month.

U.S. Department of Agriculture current retail report from Monday, Aug. 5, lists the average price of organic Hass avocados at 2.99 — 5.99 per pound, or approximately 1.49-3.50 each.

The rise in avocado prices has to do with Mexico’s avocado production typically being lowest in June and July, as well as lower than normal yields from California avocado growers this summer.

A heat wave that scorched the state last summer impacted the blooming of avocado crops, which lessened the overall yield of crops for this year. California’s hass avocados usually hit store shelves from April to July, but there are far less this season than usual.

The hottest month ever observed in California was July 2018, and the state also saw its second hottest July-August last year. 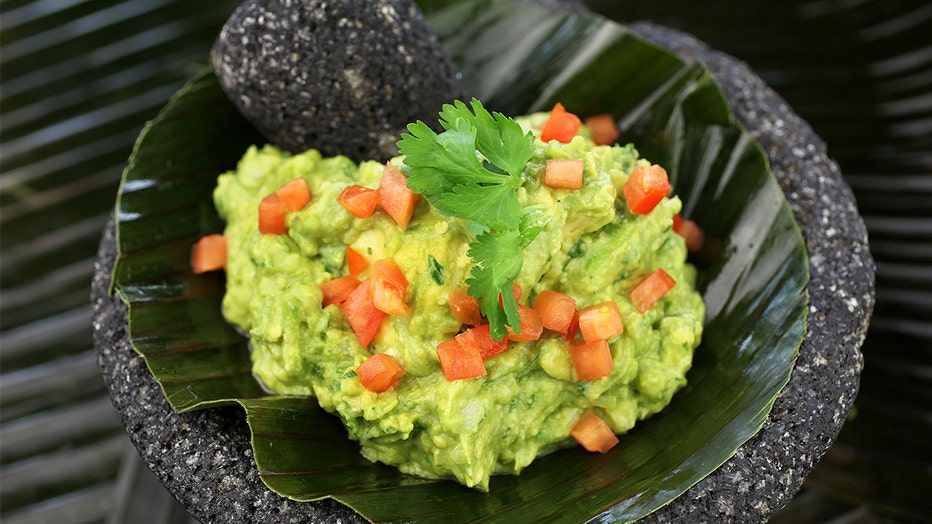 FILE: A bowl of guacamole is served in a mortar with pestle. Surging avocado prices this summer have caused some restaurants to serve "fake" guacamole made out of squash to keep prices low. (Pat Greenhouse/The Boston Globe / Getty Images)

Some restaurant owners are turning to a small, zucchini-like squash, referred to as a “calabicita,” in place of avocados in guacamole to keep prices down.

Calabicitas are a marrow vegetable, and similar to avocados, they are a fruit that is often mistaken as a vegetable. Their mild, relatively bland flavor and soft texture make them an ideal substitute for avocado when seasoned correctly.

Still, some say they’ll never compromise on their guacamole.

Bonifacio de Luna runs a Mexico City stall selling tacos and burritos and says he buys 5 kilograms of avocados per day at over 100 pesos ($5) per kilogram."It's very expensive, the price is very high," de Luna said, expressing nostalgia for a time years ago when he paid a fifth as much.

But he proudly showed off a big bowl of real guacamole and rejected the idea of selling mock guacamole as "very, very bad," adding "It's not natural.“

"I have to offer this product, because if I didn't have guacamole, people wouldn't come here to eat," said de Luna, whose hefty burritos sell for 30 pesos (a little over $2).

"This is a central element of Mexican cooking," said Corona. "A good taco should never lack good guacamole.“For anyone thinking that “squashamole” sounds like sacrilege, don’t worry.

The USDA’s retail report from Aug. 2 recorded the first week since July during which current avocado prices dropped below those from the same time frame in 2018. Mexican avocado production is also expected to ramp back up in September, which will help keep avocado prices low.