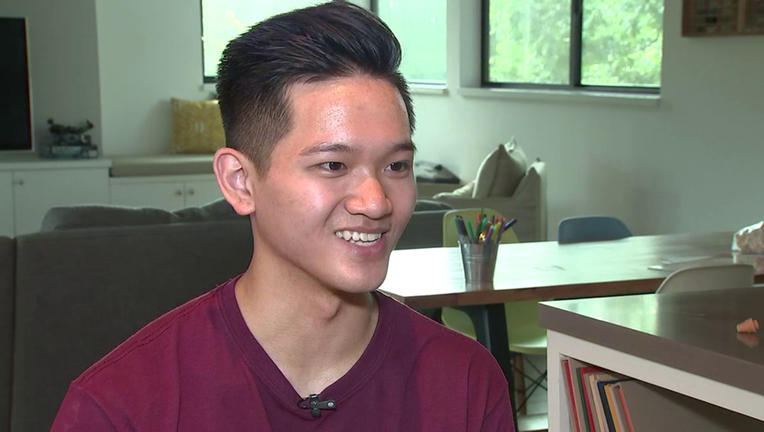 HOUSTON - One Houston high schooler is going from homeless to Harvard. Derrick Ngo will be graduating at the top of his class at Energy Institute High School this weekend as valedictorian.

“I realized that if I didn't use school and education and the resources that were available to me, then there would be no way that I would get out of the situation I was in,” Ngo said.

Driven by his determination to change his future, the 18-year-old channeled all of his childhood frustrations into school.

“My mother was heavily involved in gambling and often, me and my siblings would spend time at the casino with her so we'd be sitting at like the casino garage,” Ngo said.

Derrick went to 12 different schools growing up. His dad hasn’t been in the picture since he was two and his relationship with his mother has essentially been non-existent as she went in and out of jail multiple times.

Derrick started living on his own when he was 15, occasionally receiving rent checks from his mom. But often, it was barely enough to cover the basic essentials and at one point, at 17 years old, Derrick became homeless.

“To become the antithesis of my family and of my mother, is one of the biggest inspirations I’ve had growing up,” Ngo said.

Derrick took the bus to school every day and began focusing all of his energy into creating his success.

He said the key to his success is discipline and to never lose sight of your end goals.

“In having a vision, you have something that you're working towards. And although it's not real yet, it's something that is going to be real one day,” Ngo said.

Derrick also applied to the University of Texas at Austin, Princeton, Columbia and Harvard and was accepted into all four elite universities. Ultimately, Derrick will be attending Harvard in the fall. He’s deciding between majoring in philosophy and economics. Currently, Derrick said he’s not sure which career path he’ll pursue in the future, but hopes to impact change on other people’s lives.