With continued widespread administration of the HPV vaccine, regular screening and treatment of pre-cancerous lesions and swift treatment of invasive cervical cancer — especially in less developed countries — cervical cancer may well be on its way to becoming a disease of the past.

QUEBEC CITY - In 2018, the World Health Organization announced that the elimination of cervical cancer as a public health problem was top priority, calling for global action to boost vaccinations, screening and treatments of pre-cancer. Now experts believe that the HPV vaccine might be capable of eradicating cervical cancer.

Human papillomavirus (HPV) is a group of viruses that are common all around the world, and cervical cancer is far and away the most common HPV-related disease. The HPV virus can also cause cancers of the penis, head and neck, as well as genital warts.

More than 100 strains of the virus exist. At least 14 of them are capable of causing cancer, but 70 percent of all cervical cancers and pre-cancerous cervical lesions are caused by just two strains of the HPV virus (16 and 18).

The HPV vaccine was first introduced in 2006 and has been in wide use around the world for about a decade.The vaccine is typically administered to kids aged 11 and 12 but can be administered as early as age 9. Vaccinating during preteen years is meant to provide protection before kids are exposed to sexually transmitted viruses, but the CDC’s Advisory Committee on Immunization Practices decided Wednesday to extend the recommended vaccination age to 26. 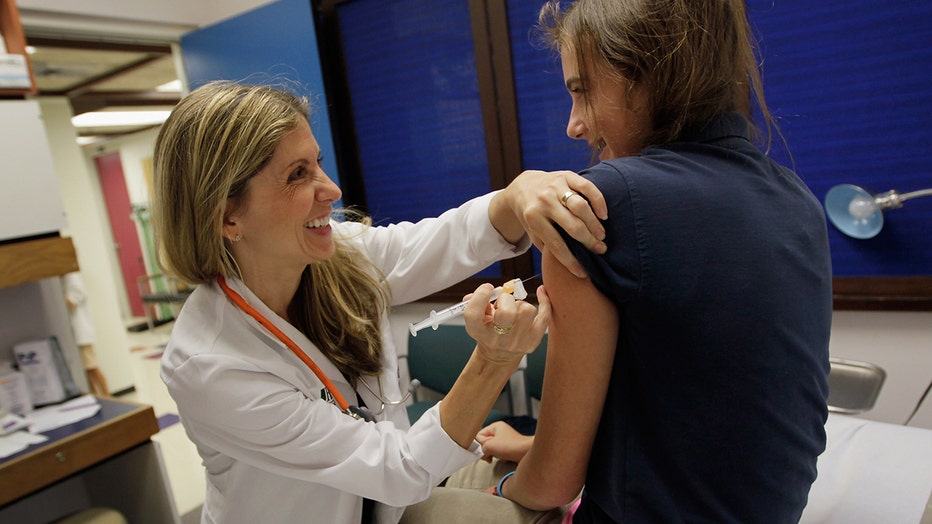 University of Miami pediatrician Judith L. Schaechter, M.D. (L) gives an HPV vaccination to a 13-year-old girl in her office at the Miller School of Medicine on September 21, 2011 in Miami, Florida. (Joe Raedle / Getty Images)

Scientists at WHO are now saying that the results of HPV vaccination over the past 10 years have been so successful that it seems probable the HPV vaccine can eliminate cervical cancer altogether.

Researchers performed a systematic review and meta-analysis of the impact of administering the HPV vaccine to prevent HPV infections, genital warts and a pre-cancerous condition of the uterus called cervical intraepithelial neoplasia grade 2+ (CIN2+), over the past 10 years. Their findings were published in The Lancet Wednesday.

The review and meta-analysis compared the data of 60 million individuals from 14 countries and included eight years of post-vaccination follow-ups. The results provided compelling evidence of the significant impact of the HPV vaccine in reducing HPV infections and CIN2+ among girls and women, and genital warts diagnoses in girls, women, boys and men.

After five to eight years of vaccination, the prevalence of HPV 16 and 18 — the two most commonly responsible for causing cervical cancer — decreased by 83 percent for girls aged 13-19, and dropped 66 percent for women aged 20-24.

According to the CDC, the HPV vaccine isn’t just protecting those who receive it.

Researchers found strong evidence of herd immunity in countries where half the targeted population for vaccination actually received the vaccination. In other words, those populations saw a decrease in cases of HPV-related diseases even among those who didn’t receive the vaccination because there were less HPV-infected hosts spreading the disease.

“Widespread coverage of both HPV vaccination and cervical screening from 2020 onwards has the potential to avert up to 12.5–13.4 million cervical cancer cases by 2069, and could achieve average cervical cancer incidence of around four per 100,000 women per year or less...by the end of the century,” the Lancet report predicted.

With continued widespread administration of the HPV vaccine, regular screening and treatment of pre-cancerous lesions and swift treatment of invasive cervical cancer — especially in less developed countries — cervical cancer may well be on its way to becoming a disease of the past.