The long-term health effects of consuming microplastics are uncertain, but scientists know that the average person already consumes tens of thousands of particles each year. Here's a simple way to reduce that amount.

VICTORIA, British Columbia - Every year, Americans consume tens of thousands of microplastic particles that come from the food they eat, the water they drink and the air they breathe, but scientists really aren’t sure yet what kind of long-term health effects will result from this level of plastic consumption. A team of researchers from the Department of Biology at the University of Victoria in British Columbia, Canada, performed a study to quantify just how much microplastic the average person consumes.

The findings of this study, published in the journal Environmental Science & Technology in June, revealed that Americans eat and drink an average of 39,000 to 52,000 microplastics each year.

When researchers factored in the additional microplastics that we inhale from the air, the numbers jumped dramatically to approximately 74,000 to 121,000 particles consumed annually.

For those who only drink bottled water, tack on an additional estimated 90,000 to 100,000 particles consumed each year.

What’s even more unnerving is that the estimates produced in this study are likely low. Estimates were determined by analyzing the amount of microplastics in foods and beverages that comprise only 15 percent of Americans’ caloric intake.

“Human reliance on plastic packaging and food processing methods for major food groups such as meats, fruits and veggies is a growing problem,” said Kieran Cox, lead author of the study and marine biology Ph.D. candidate at the University of Victoria. “Our research suggests microplastics will continue to be found in the majority—if not all—of items intended for human consumption. We need to reassess our reliance on synthetic materials and alter how we manage them to change our relationship with plastics.” 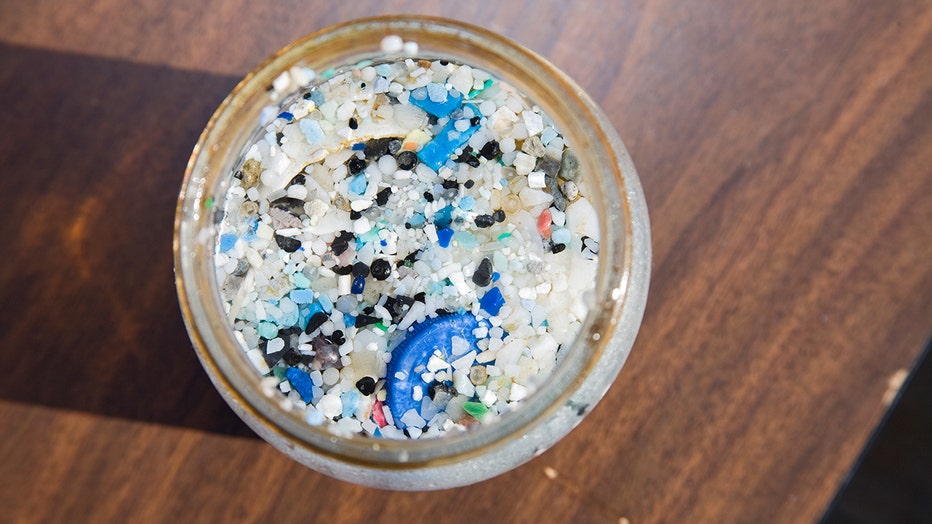 Plastic sample jar collected by the ORV Alguita during four months at sea sampling the waters of the great Pacific garbage patch. (Citizen of the Planet/Education Images/Universal Images Group via Getty Images)

Some manufacturers and sellers have taken responsibility for making such changes, like supermarkets in Asia that are opting to package produce in banana leaves instead of plastic, as shown in this video from the South China Morning Post. Zero-waste grocery stores are also on the rise, where goods are stored in clear self-service bins, and shoppers bring their own containers from home.

Initiatives like these are still few and far between at the global scale, so much of the change to our relationship with plastic will have to begin with the individual.

So how can you consume less plastic?

According to Tapp Water, there are three types of water filters which can reduce the amount of microplastic in your drinking water — granular activated carbon faucet filters, carbon blocks filters and reverse osmosis filters.

Small changes can also help reduce the amount of microplastic entering the environment.

Right now the U.S. is only able to recycle about five percent of its plastics.

According to the EPA, plastics production is expected to double in the next 20 years and quadruple by 2050. It’s possible that by 2050, there could be more plastics in the ocean than fish.

Buying non-synthetic, eco-friendly clothes, using a laundry ball during wash cycles and air drying your clothes instead of using the dryer can reduce the amount of microplastic fibers your wardrobe releases.

In light of his team’s findings, most specifically on the amount of microplastic consumed when drinking bottled water versus tap, Cox stresses the significance of small efforts in the larger battle against microplastic contamination.

“Small decisions, over the course of a year, really matter and have an impact,” said Cox.