Border Patrol agents in Rio Grande Valley (RGV) sector have picked up dozens of migrants at stash houses -- shining light on the operations smugglers use to get illegal immigrants into the U.S., and the harsh conditions those migrants face.

WASHINGTON - U.S. Immigration and Customs Enforcement will avoid detaining most undocumented people who are pregnant, postpartum or nursing, according to a new policy announced on Friday.

The policy states that ICE should not "detain, arrest, or take into custody" those in violation of immigration laws who are known to be pregnant, nursing or had a baby within the previous year, "unless release is prohibited by law or exceptional circumstances exist."

The exceptional circumstances are listed as those who pose a "risk of death, violence, or physical harm to any individual," or those who pose "national security concerns."

The directive is the latest move by the Biden administration to ease immigration detention policies enacted during the Trump administration. It revokes a directive from late 2017 that ended the presumption of release for pregnant detainees.

The issue of pregnant women in immigration custody gained more attention in 2019 when a 24-year-old Honduran woman went into premature labor and delivered a stillborn baby. Officials said the woman was arrested by the Border Patrol on Feb. 18 near Hidalgo, Texas, and had spent four days in immigration custody.

ICE officials said in a statement Friday that the agency aims to preserve "the health and safety" of expecting and new mothers.

"ICE is committed to safeguarding the integrity of our immigration system and preserving the health and safety of pregnant, postpartum, and nursing individuals," Acting ICE Director Tae Johnson said in the statement. "This reflects our commitment to treat all individuals with respect and dignity while still enforcing our nation’s laws." 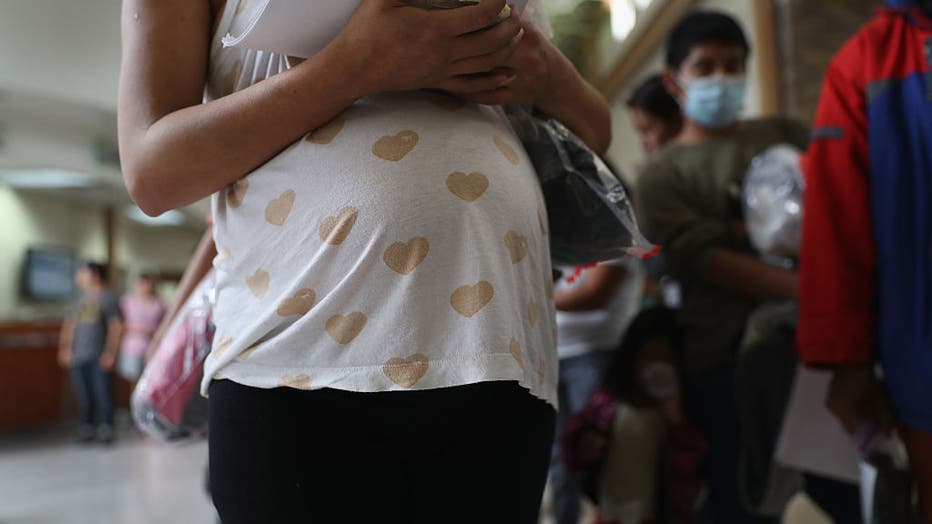 FILE - A pregnant Honduran immigrant stands in line with fellow immigrants for a bus to a U.S. destination on Aug. 15, 2016 from McAllen, Texas. (Photo by John Moore/Getty Images)

The new policy expands on rules enacted under the Obama administration, but now also includes those who gave birth within the past year and those who are nursing.

Between 2016 to 2018, ICE detained pregnant individuals more than 4,600 times, according to a Government Accountability Office report. Most detentions lasted a week or less, the report said.

A total of 13 pregnant women were in ICE custody as of Thursday and were being considered for release under the new policy, officials told the Washington Post.

A record number of migrants attempting to cross into the U.S. have been reported since President Joe Biden took office, including unaccompanied children. U.S. Customs and Border Protection logged more than 180,000 encounters on the Mexican border in May, the most since March 2000.

Critics have attacked the Biden administration as weak on border security. Vice President Kamala Harris was assigned to lead efforts to address the root causes of migration to the U.S. from countries like Mexico, El Salvador and Guatemala and faced criticism from members of both political parties for failing to visit the border sooner.

Harris has emphasized that her focus is on improving conditions for residents of those countries through economic and humanitarian aid.