Assange supporters celebrate as British court rejects extradition to US

Supporters of Wikileaks founder Julian Assange celebrate outside the Old Bailey court in central London after a judge ruled that Assange should not be extradited to the United States to face espionage charges. (Credit: Andela Milivojevic via Storyful)

LONDON - The United States asked Britain’s High Court on Wednesday to overturn a judge’s decision that Julian Assange should not be sent to the United States to face espionage charges, promising that the WikiLeaks founder would be able to serve any prison sentence he receives in his native Australia.

In January, a lower court judge refused an American request to extradite Assange on spying charges over WikiLeaks’ publication of secret military documents a decade ago. District Judge Vanessa Baraitser denied extradition on health grounds, saying Assange was likely to kill himself if held under harsh U.S. prison conditions.

An attorney for the U.S. government, James Lewis, argued Wednesday that the judge erred when she ruled Assange would be at risk of suicide because of the oppressive conditions. He said American authorities had promised that Assange would not be held before trial in a top-security "Supermax" prison or subjected to strict isolation conditions, and if convicted would be allowed to serve his sentence in Australia.

Lewis said the assurances "are binding on the United States."

RELATED: Amnesty International calls for charges to be dropped against Julian Assange

U.S. authorities also argue that Assange does not meet the threshold of being so ill that he cannot resist harming himself.

Lewis said Assange did "not even come close to having an illness of this degree."

"Once there is an assurance of appropriate medical care, once it is clear he will be repatriated to Australia to serve any sentence, then we can safely say the district judge would not have decided the relevant question in the way that she did," Lewis said. 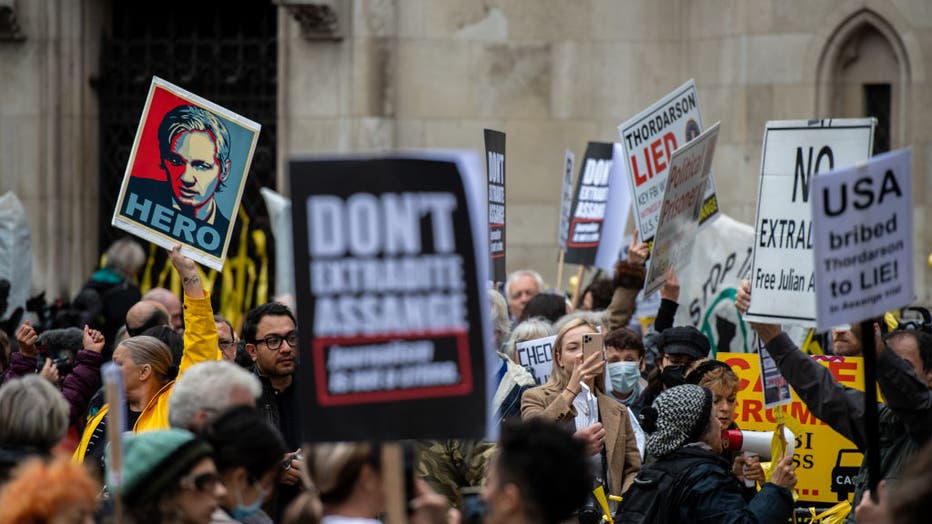 LONDON, ENGLAND - OCTOBER 27: Supporters of Julian Assange gather outside the Royal Courts of Justice, Chancery Lane ahead of an appeal hearing for his extradition to the United States on Oct. 27, 2021, in London, England. (Photo by Chris J Ratcliffe

Assange's lawyer, Edward Fitzgerald, said in a written submission that Australia had not agreed to take Assange if he is convicted. Even if Australia did agree, Fitzgerald said the U.S. legal process could take a decade, "during which Mr. Assange will remain detained in extreme isolation in a U.S. prison."

He accused U.S. lawyers of seeking to "minimize the severity of Mr Assange’s mental disorder and suicide risk."

Several dozen pro-Assange protesters rallied outside London's neo-Gothic Royal Courts of Justice before the hearing, which is scheduled to last two days.

Assange, who is being held at London’s high-security Belmarsh Prison, had been expected to attend by video link, but Fitzgerald said Assange had been put on a high dose of medication and "doesn't feel able to attend the proceedings."

A video link later showed Assange appearing to listen to the hearing at times. His lawyers say he has experienced a number of physical and mental health problems over the years.

Assange's partner, Stella Moris, said outside court that she was "very concerned for Julian’s health. I saw him on Saturday. He’s very thin."

The two justices hearing the appeal — who include England’s most senior judge, Lord Chief Justice Ian Burnett — are not expected to give their ruling for several weeks. That will likely not end the epic legal saga, however, since the losing side can seek to appeal to the U.K. Supreme Court.

U.S. prosecutors have indicted Assange on 17 espionage charges and one charge of computer misuse over WikiLeaks’ publication of thousands of leaked military and diplomatic documents. The charges carry a maximum sentence of 175 years in prison, though Lewis said "the longest sentence ever imposed for this offense is 63 months."

In her January judgment, Baraitser rejected defense arguments that Assange faces a politically motivated American prosecution that would override free-speech protections, and she said the U.S. judicial system would give him a fair trial.

Assange, 50, has been in prison since he was arrested in April 2019 for skipping bail during a separate legal battle. Before that he spent seven years holed up inside Ecuador’s London embassy, where he fled in 2012 to avoid extradition to Sweden to face allegations of rape and sexual assault.

Sweden dropped the sex crimes investigations in November 2019 because so much time had elapsed, but Assange remains in prison. The judge who blocked extradition in January ordered that he must stay in custody during any U.S. appeal, ruling that the Australian citizen "has an incentive to abscond" if he is freed.

WikiLeaks supporters say testimony from witnesses during the extradition hearing that Assange was spied on while in the embassy by a Spanish security firm at the behest of the CIA — and that there was even talk of abducting or killing him — undermines the U.S. claims he will be treated fairly.

Moris, who has two young sons with Assange, said it was "completely unthinkable that the U.K. courts could agree" to extradition.

"I hope the courts will end this nightmare, that Julian is able to come home soon and that wise heads prevail," she said.