A Philadelphia grand jury has recommended criminal charges against three former homicide detectives, including perjury in the 2016 retrial of Anthony Wright, who was since exonerated by DNA evidence in the rape and murder of an elderly woman.

PHILADELPHIA - A Philadelphia grand jury has recommended criminal charges against three former homicide detectives, including perjury in the 2016 retrial of Anthony Wright, who was since exonerated by DNA evidence in the rape and murder of an elderly woman.

Philadelphia District Attorney Larry Krasner announced the results of the grand jury investigation at a news conference Friday, saying the three former detectives, Manuel Santiago, Martin Devlin and Frank Jastrzembski, were in the process of turning themselves in early Friday afternoon.

They face various charges including perjury and swearing false statements during Wright's retrial and his subsequent civil lawsuit.

"These charges are an indication that a Philadelphia jury, in this case a grand jury, can carefully look at evidence and can understand that the law must apply equally to people, whether they are in law enforcement, or supposed to be served by law enforcement," Krasner said Friday.

Attorney information for the men was not immediately available in court documents. A spokesperson for the city’s police union said the union is providing legal representation for the three men, but declined to further comment. 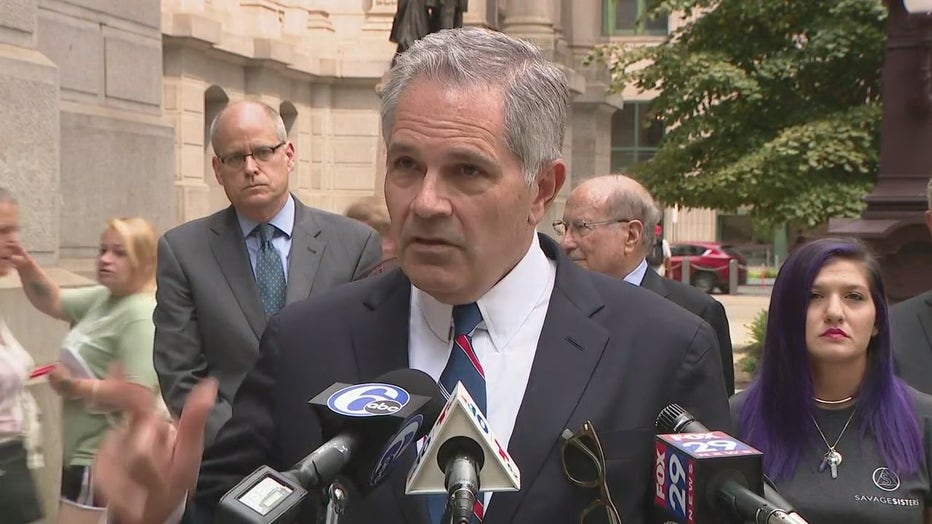 Wright was convicted in 1993 of the 1991 rape and killing of 77-year-old Louise Talley. Attorneys representing Wright in his appeal discovered DNA evidence decades later that showed another man, who had since died, had committed the rape.

Wright's conviction was overturned, but former District Attorney Seth Williams' office moved to retry him in 2016 saying that other evidence showed he was an accomplice to the crime. He was acquitted in less than an hour by a jury.

During that retrial, issues around the officers’ testimony and their involvement in the case were revealed.

Krasner said Friday that Santiago and Devlin had coerced what was a clearly false confession from Wright, who was 20 at the time and had denied knowing anything about the crime. He said the pair had used "unlawful tactics in order to coerce Wright" into signing the confession, noting they had allegedly prevented him from reading what he had signed, had made false promises that he could go home if he signed the document and made violent threats toward him.

Krasner said the charges against Jastrzembski include allegations that he had lied under oath about finding bloody clothing that linked Wright to the crime while searching his room. Krasner said the clothes were actually found at the victim's house and had what is called "wearer" DNA, meaning the victim had worn them, not the killer.

Wright, who served 25 years for the crime and faced a potential death sentence, settled a lawsuit against the city for $9.8 million in 2018.

The detectives, who had served more than 25 years in the Philadelphia department, have been mentioned in at least four other recent cases in which defendants were eventually exonerated. Those include convictions marred by coerced confessions, withheld or falsified evidence and sometimes deals with witnesses that were withheld from defense attorneys.

As those exonerations have occurred, the detectives have maintained they did not commit any wrongdoing.

In most of the exoneration cases examined by Krasner's Conviction Integrity Unit, the statute of limitations on perjury and other possible issues had long passed. But because of the 2016 retrial of Wright and the sworn depositions in his civil case, charges could be brought.