Fire officials say some returned to Laguna Niguel after being ordered to evacuate -- only to see their homes have been destroyed.

The wind and terrain-driven fire marched relentlessly through an enclave of multimillion-dollar estates on the hillside overlooking the ocean, leading to evacuations of dozens of residents and high school students in the community.

Officials said at least 20 homes were destroyed and 11 other homes damaged by the blaze.

About seven days after the fires broke out, officials announced on Wednesday, May 18 that all evacuations have been lifted in the Laguna Niguel area.

Two firefighters have been injured while fighting the blaze. Southern California Edison has advised state utility regulators that unspecified electrical "circuit activity" occurred around the time a destructive wildfire erupted in the coastal community of Laguna Niguel.

Orange County has declared a local state of emergency to aid in the firefighting efforts. The proclamation allows the county to fully deploy all available resources, actions, and measures necessary.

California has secured a fire management assistance grant from the Federal Emergency Management Agency (FEMA) to ensure the availability of resources to battle the fire, Gov. Gavin Newsom said in a statement.

The grant is provided through funds from the federal disaster relief fund and enables local, state and tribal agencies responding to the fire to apply for 75% reimbursement of their eligible fire suppression costs.

While the cause of the fire is under investigation, officials with Southern California Edison confirmed that "information reflects circuit activity occurring close in time to the reported time of the fire."

"Our thoughts are with the community members whose homes have been damaged and those who were evacuated because of the Coastal Fire, and we are coordinating with fire agencies as needed to ensure firefighter safety," said SCE spokesman David Song. "We submitted an initial Electric Safety Incident Report to the California Public Utilities Commission. SCE is required to submit an ESIR to the CPUC on certain types of incidents. ... Our information reflects circuit activity occurring close in time to the reported time of the fire. ...The submission of this report to the CPUC is intended to put them on notice of an incident so that it can conduct its own investigation."

The fire prompted the Orange County Sheriff's Department (OCSD) to ask residents in the communities in the Coronado Pointe, Vista Court, La Vue, Le Port and Via Las Rojas to evacuate. As firefighters worked on fully containing the fire, about 900 homes in Orange County were included in the mandatory evacuation zone before that number gradually started decreasing over the course of the week.

All evacuation orders were finally lifted May 18, about seven days after the fires broke out.

Prior to the evacuations being lifted, residents in the following areas were ordered to evacuate due to the Coastal Fire:

As crews dealt with the massive fire, a temporary shelter opened at the Crown Valley Community Center at 29751 Crown Valley Parkway for those displaced by the fire.

The City of Laguna Beach released an "Evacuation Zones" map for residents to show which areas were under evacuation orders or warnings. Click on the locator button in the map below to find your location:

Authorities also released a map of evacuation routes for residents in the area. 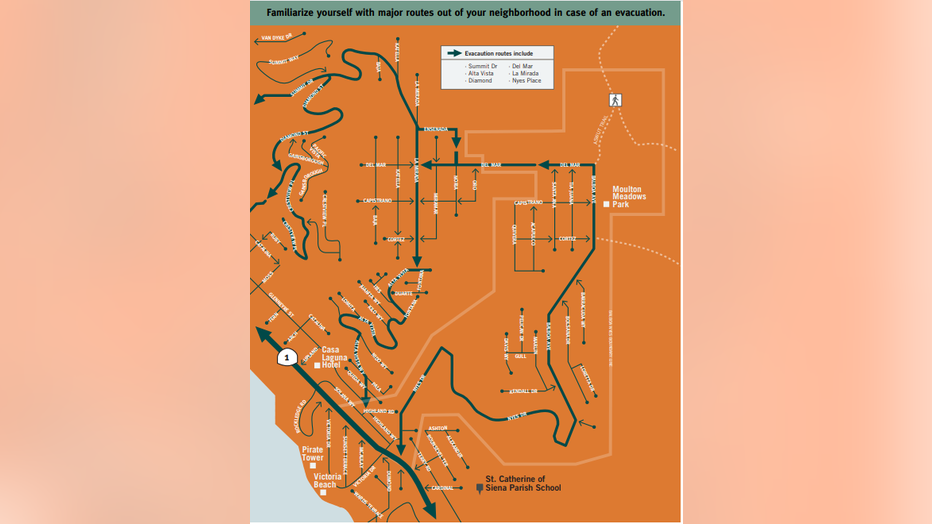 Courtesy of the City of Laguna Beach

Officials in Anaheim said that the Coastal Fire will not be a threat to those living in the city of Anaheim.

MORE ON THE COASTAL FIRE

During SkyFOX's coverage, two people were spotted standing near the fire. It is unknown if the two witnesses were crew members or if they were just onlookers.

SkyFOX was also over a scene when several mansions located along the Aliso Summit Trail, Coronado Pointe, La Vue and Le Prt and at Vista Montemar caught fire. 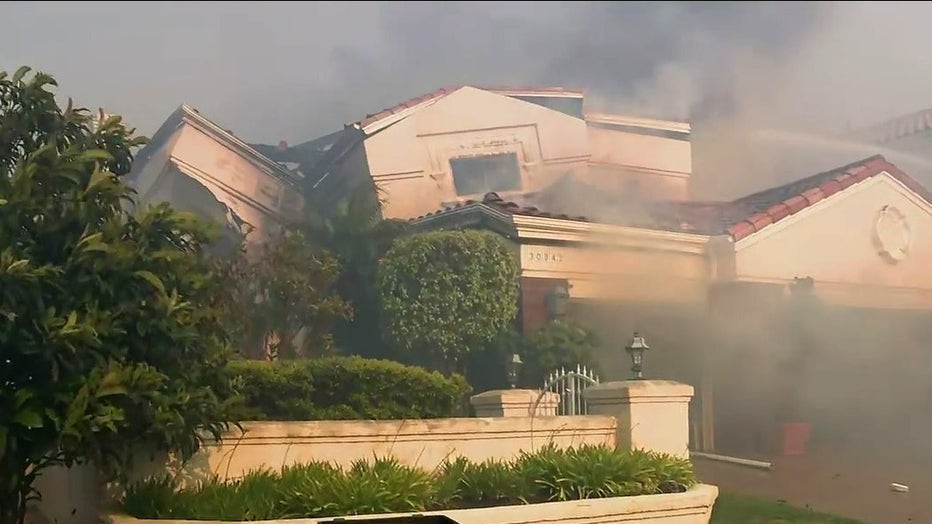 One of the homes in the Aliso Canyon area collapsed during the Coastal Fire.

The Orange County Fire Authority and the Los Angeles Fire Department are among the departments helping the Laguna Beach Fire Department in the region-wide push to contain Coastal Fire.

FOX 11 was outside one of the homes in Laguna Niguel where a Tesla parked in a driveway, as well as the home behind it, was burned down.

FOX 11 meteorologist Rick Dickert explained that cool, onshore winds caused the fire to spread across the area, not to be confused with the Santa Ana winds, which are often blamed for the spread of other fires in Southern California.

A fire broke out near the same area about three months ago. The Emerald Bay Fire sparked in Laguna Beach on the morning of Feb. 10. Fire officials said the fire was contained at 150 acres.