Like many around her, she thought at first it was fireworks. Then, people fell dead and wounded. Winter ducked for cover until police SWAT officers arrived and told her to run. She remembers yelling, "Make him stop! Make him stop!"

Winter, 49, lived in San Diego then. She now lives in Nashville, Tennessee, and counsels others she calls "the Router family" who experienced the deadly night a gunman perched in a hotel killed 58 people at the Route 91 Harvest Festival. "Router" sounds better than "survivor," Winter explained. The deaths later of at least two others have brought the unofficial death toll to 60.

"There is a lot of healing taking place," Winter said this week. "There are a lot of people who are still struggling. There are 22,000 of us that were there. That doesn’t even include other people that were impacted ... first responders, hospital employees, average citizens who were driving down the Strip. All those people and all those different stories."

Woman marries man who saved her in Vegas shooting

The pair met just 24 hours prior to the 2017 mass shooting and escaped together during the rampage. They later fell in love and tied the knot.

This is the first year since the shooting that Winter won’t be in Las Vegas to mark the anniversary at memorials like a sunrise ceremony at the Clark County Government Center and a 10:05 p.m. reading at a downtown Las Vegas Community Healing Garden of the names of those killed in the Oct. 1, 2017, massacre.

The 7 a.m. ceremony is set to feature comments from elected officials and Dee Ann Hyatt, whose brother Kurt von Tillow died in the shooting. Singer Matt Sky, who worked with Adam Levine on NBC’s "The Voice," will sing "Four Years After," a song composed for the anniversary by Mark R. Johnson and released with multi-Grammy award winner Alan Parsons.

In Southern California, "So Cal Route 91 Heals" will host a live-stream of the sunrise remembrance and an afternoon ceremony at Conejo Creek Park in Thousand Oaks.

Tennille Pereira, director of the Vegas Strong Resiliency Center, a Las Vegas program set up to support those affected by the shooting, noted that about 60% of tickets sold to the fateful concert were purchased by California residents.

Next year's fifth anniversary may feature the dedication of a new memorial, Pereira said, at a corner of the former concert venue across Las Vegas Boulevard from the Mandalay Bay resort, where the shooter spent several days gathering an arsenal of assault-style rifles before breaking out windows of his 32nd floor suite and unleashing carnage.

The gunman, Stephen Paddock, a 64-year-old retired postal service worker, accountant and real estate investor who had become a high-stakes casino video poker player, killed himself before police reached him. Local and federal investigators concluded he meticulously planned the attack and appeared to seek notoriety, but they said they could not identify a clear motive.

Authorities including police, elected and government officials and people involved with the resiliency center refuse now to use his name. 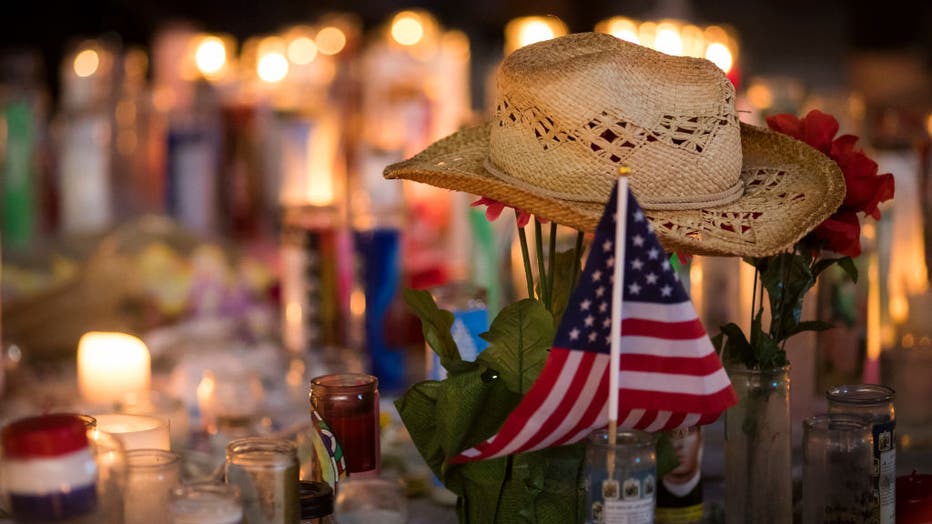 FILE - A hat is left at a makeshift memorial during a vigil to mark one week since the mass shooting at the Route 91 Harvest country music festival on Oct. 8, 2017, in Las Vegas, Nevada. (Photo by Drew Angerer/Getty Images)

MGM Resorts International, owner of the hotel and the concert venue, is donating 2 acres (0.8 hectare) for the memorial — just off the Strip at a spot near a church where people took cover during the shooting.

"1 October was a tragedy that forever changed our community, and we continue to grieve with and support those impacted by that senseless act of violence," the company said in a statement.

RELATED: 'I felt safe with him': Woman marries man who saved her in Las Vegas mass shooting

MGM Resorts and its insurers have almost finished paying $800 million to more than 4,000 claimants in an out-of-court settlement reached a year ago that avoided negligence trials in several states. The company acknowledged no liability.

"It’s good for the community and the victims that the case is resolved," Robert Eglet, a Las Vegas attorney who spent a year arranging the settlement, said Thursday. "And it was the right thing for MGM to do."

Pereira also is chairwoman of a Clark County committee developing plans for the permanent memorial. She said this week that she felt a softening of emotions around the anniversary.

"Four years. This year marker seems different to me," she said. "Where people are in their healing is different. Where the community is different. Maybe it’s because we just came out of this (coronavirus) pandemic and we’re starting to feel a regular pace again."

"It’s a bit softer," Pereira said. "We’re not as emotional. We still remember, we still respect, we still honor. But it’s not raw like it was, and jarring. It just feels more hopeful and peaceful."

Winter said she planned to gather on Friday with other "Routers" at a friend’s restaurant in Memphis, Tennessee.

"It’s always emotional. But it’s also really heartwarming," she said. "The fact that we’ve come together and not let evil win is so amazing."

"There are so many people who think we should be over it," she added. "This is not something you ever get over. It’s forever changed us."