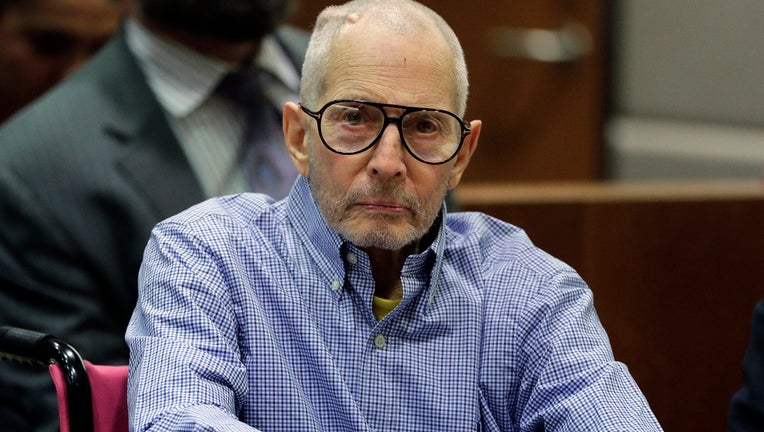 LOS ANGELES - Lawyers for New York real estate heir Robert Durst acknowledge he penned a note tipping off police to the location of the body of a friend he’s accused of killing, according to court documents.

In a court filing last week in Los Angeles Superior Court, lawyers for Durst conceded he had written the note directing police to the home where his best friend, Susan Berman, was shot point-blank in the back of the head just before Christmas of 2000.

Durst, 76, pleaded not guilty to murder in Berman’s death but told a documentary film crew that the letter could only have been sent by the killer.

The revelation he sent the note was made in a joint filing by defense lawyers and prosecutors of stipulations they’ve agreed to before his trial scheduled for Feb. 10. Attorneys for Durst said they made the concession as a strategic decision after the judge agreed to admit the evidence based on analysis by handwriting experts.

The defense, which had long denied he wrote the note, said they still plan to challenge that ruling on appeal. Attorney Dick DeGuerin told The Associated Press that the defense won’t comment on the stipulation.

“This does not change the facts that Bob Durst didn’t kill Susan Berman and he doesn’t know who did,” DeGuerin said.

Durst killed Berman because he feared his friend and unofficial spokeswoman was going to tell police what she knew about the mysterious disappearance of his wife, Kathleen, in New York in 1982, prosecutors said.

The note sent to the Beverly Hills Police Department on the same day Berman was killed has been considered a smoking gun in the case since the bombshell finale of “The Jinx: The Life and Deaths of Robert Durst” aired on HBO in 2015.

Durst was shown the note written in block letters that only included the address of Berman’s house and the word “cadaver.” He denied writing the note but said “only the killer could have written” it. The envelope was addressed with Beverly misspelled “Beverley.”

Filmmakers then confronted him with a letter he sent Berman a year earlier that appeared to have identical handwriting, including the same misspelling.

“I wrote this one but I did not write the cadaver one,” Durst insisted. But moments later, he couldn’t tell the two apart. After an awkward moment in which he blinked, burped and put his head in his hands, he denied being the killer.

The interview then ended and Durst walked into a bathroom unaware he was still wearing a live microphone. He was heard muttering to himself: “You’re caught! What the hell did I do? Killed them all, of course.”

One law enforcement official, who spoke to The Associated Press on condition of anonymity because the investigation was ongoing, said analysis linking Durst to the letters was the key new evidence presented to prosecutors before his arrest.

Durst was nabbed on the eve of the broadcast in New Orleans, where he was staying in a hotel under a pseudonym and appeared to be making plans to leave the country.

After Berman’s death, Durst went into hiding in Galveston, Texas, where he disguised himself as a mute woman in a boarding house. He killed his neighbor, Morris Black, in 2001 in what he claimed was self-defense after the men struggled over a gun. He then chopped up the man’s body and disposed of it at sea.

Durst was acquitted of murder in that case. Prosecutors claim Black was killed after he learned Durst’s real identity.

Deputy District Attorney John Lewin plans to present evidence at trial that the killings of Black and Berman were both part of an effort to cover up the slaying of Kathleen Durst years earlier.

Kathleen Durst’s body has never been found and she was declared dead two years ago. Robert Durst, reportedly worth $100 million, is considered the prime suspect in her presumed killing but has never been charged.

Witnesses who testified in pretrial hearings said Berman told them Durst acknowledged killing his wife and that she helped him cover up the crime. They also testified that Berman said if anything happened to her, Durst would be responsible.

The defense also stipulated that Durst wrote a note found in a trash can in a bedroom at the home the couple shared in Westchester County, New York, where they had been staying just before Durst said he last saw his wife.

Referred to as the “dig note,” it appears to be a list including the words “town dump,” “dig” and “shovel.”