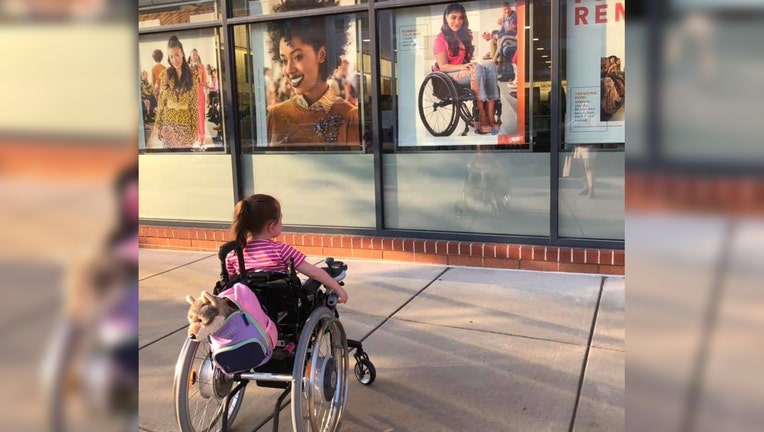 LEESBURG, Va. (FOX 5 DC) - A precious photo of a 4-year-old admiring an ad of a woman that "looks like her" has melted social media's heart.

Maren Anderson is a dance-loving, babydoll-toting, bike-riding little girl and her mom, Carolyn Anderson, says she has the most infectious giggle and smile.

She has rare disease caused by a gene mutation that causes expressive language delays, and requires a wheelchair to get around. However, that has not stopped the spirited little girl from showing great motivation and tenacity to overcome that challenges she faces.

According to her mom, Maren has been practicing “driving” her new wheelchair for about 12 weeks and has only recently become comfortable using it in public.

On one particular evening, Maren was cruising in her wheelchair, exuding a confidence her family had not seen before.

“She was so eager, we could barely get her to stop at crosswalks.” Carolyn said, “Then, she suddenly stopped and focused all her attention on this image of a woman in a wheelchair like hers.”

Mesmerized to see a person like her, it was the first time she really connected with an image of a wheelchair user.

She got to see herself in this picture, and that planted a seed for her to see that there is a place for kids like her in this world. She was included.

Anderson captured a picture and posted the photo on Facebook—which quickly went viral.

She wrote: "Well Ulta, you absolutely stopped my girl in her tracks this evening. It was mesmerizing to watch her stop, turn and gaze at this poster. So thank you."

Thousands of heartwarming comments poured in, and to date the post has over 60,000 shares.

Her photo just shows how supportive our society can be.

Anderson hopes that Maren’s reaction inspired more inclusion and representation of the disability community, and highlights the need for continued progress.

“We are grateful to live in a community that accepts and supports our daughter.” Anderson told FOX 5, “We are teaching Maren how to advocate for herself as members of the Little Lobbyists who advocate for the protection and expansion of her rights. Despite having a pre-existing condition, Maren, like everyone, deserves access to healthcare, education, and community inclusion.”

Their wish is that one day stories like theirs won’t be considered newsworthy but that it will be commonplace.