Monell Coleman, 25, was arrested at an apartment building near West Chester University on Friday. He is accused in a non-fatal shooting of a woman and her brother after she accidentally bumped into him at a Coatesville market.

WEST CHESTER, Pa. - Authorities arrested a man accused of following a woman home and shooting her after she bumped into him at a Coatesville grocery store last month.

Moenell Coleman, 25, was taken into custody Friday near the campus of West Chester University, according to authorities. It's believed that Coleman was hiding out with a friend who lives in a student apartment complex on the 100 block of Carey Drive.

According to investigators, Coleman became irate when a woman in her 20s accidentally bumped into him at Coatesville Market on East Lincoln Highway in late January. The woman apologized to Coleman, but police said he threatened to shoot her as she left the store. 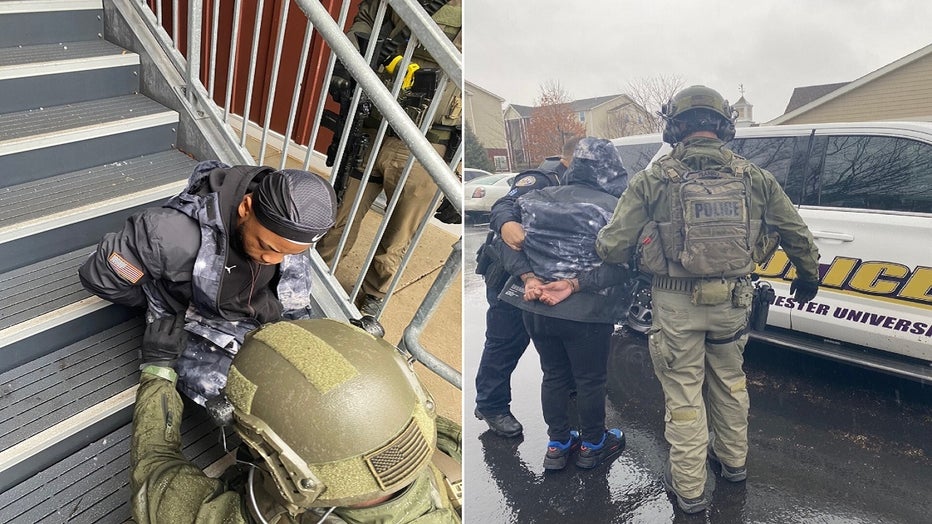 It's believed that Coleman followed the woman to her home around the corner and opened fire as she stood in the doorway. She was grazed in the leg by gunfire and her brother, who was inside the home, suffered a non-fatal gunshot wound.

Coleman was immediately developed as a suspect through surveillance footage from the store. Officers went to his last known residence but did not find him, it was believed that Coleman could be in Wilmington, Delaware.

U.S. Marshal’s Fugitive Task Force received information that Coleman was hiding out with a "female associate" on the campus of West Chester University. Agents surveyed the Village Apartments, a student housing complex, and saw Coleman entering the building.

He was later arrested by federal and local authorities without incident, officials said.

"Moenell Coleman’s excessively violent proclivities were a clear danger to the community," U.S. Marshal for the Eastern District of Pennsylvania Eric Gartner said.