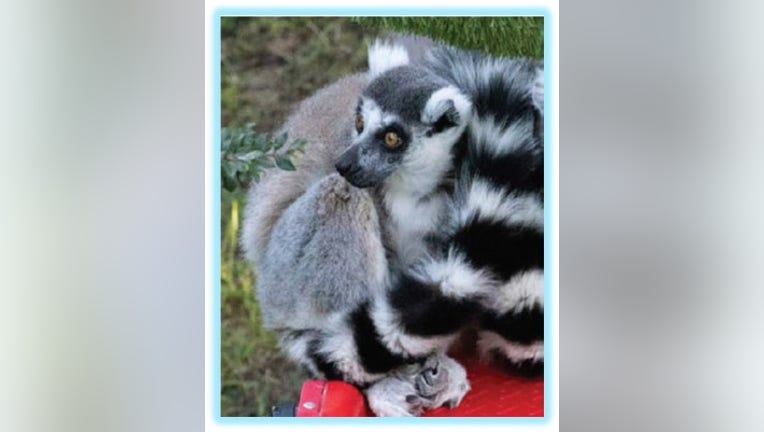 Maki, a ring-tailed lemur taken from the San Francisco Zoo on Oct. 13, 2020 (Courtesy of the U.S. Attorney's Office)

SAN FRANCISCO - A man accused of breaking into the San Francisco Zoo and Gardens last year and stealing a ring-tailed lemur -- an endangered species -- made his initial court appearance in federal court on Monday.

Cory McGilloway, 31, has been charged with violating the Endangered Species Act, and, if convicted, he could face up to a year in jail and as much as $50,000 in fines, federal prosecutors said.

Prosecutors allege that McGilloway, a Los Angeles resident, entered the zoo the night of Oct. 13, 2020, and took one of the zoo's four ring-tailed lemurs.

Two days later on Oct. 15, 2020, a woman told San Francisco police officers that she saw a man walking a lemur on a leash on Treasure Island the day before, believed to be McGilloway and Maki.

Maki was found later that day after a 5-year-old boy spotted Maki unattended at the playground of Hope Lutheran Day School in Daly City. With help from San Francisco Animal Care and Control, Maki was returned to the zoo.

The same day, officers in San Rafael arrested McGilloway in connection with a separate investigation in which he was suspected of shoplifting and taking a vehicle without the owner's consent.

At the time of his rescue, Maki was hungry and dehydrated.

He's now back at the zoo's Lipman Family Lemur Forest -- the largest outdoor lemur habitat in North America -- and in good condition, according to zoo officials.

California residents are banned from having lemurs, native to Madagascar, as pets because of their endangered status.

The boy who found Maki, James Trinh, has been lauded by city officials as a hero.