Some of the first COVID-19 vaccinations in Arizona were administered by US Army National Guardsmen at the Maricopa County Fairground in December 2020. (Credit: DVIDS via Storyful)

Pentagon officials said five vaccination sites will remain open after starting with more than 35 locations in February. Since that time, 16 million COVID-19 vaccine doses have been administrated after the DOD partnered with Federal Emergency Management Agency to help people get inoculated. In February, FEMA had asked the Pentagon to supply as many as 10,000 service members to staff 100 centers.

There has been no word yet on when the mass vaccination sites will close. The sites that will stay open will be located in New Jersey, Oklahoma, Oregon, Minnesota and Kentucky.

"As of today, we are supporting eight vaccination sites and expect to reduce that to five by the end of today," Pentagon Press Secretary John F. Kirby said in a statement. "We are proud of the support, of course, that our service members — both active duty and National Guard — have provided to combat this pandemic." 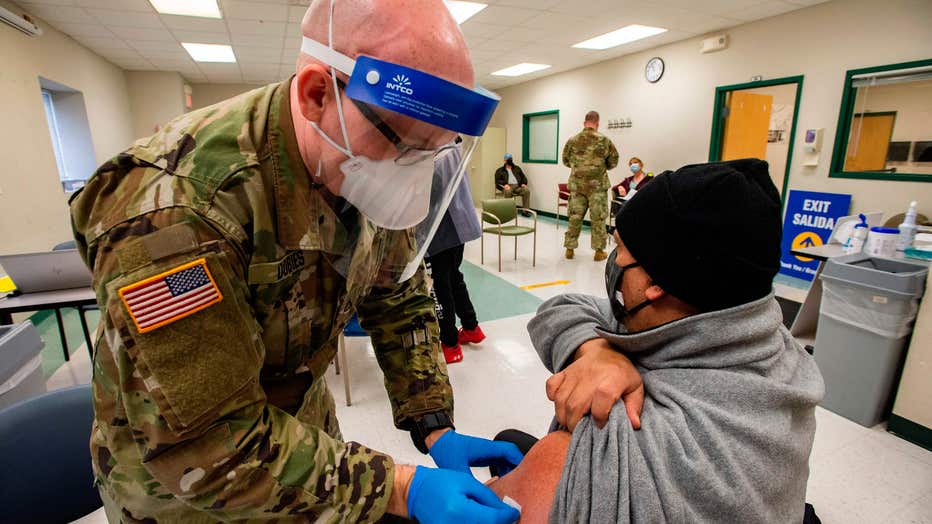 A soldier prepares to vaccinate a man at an East Boston Neighborhood Health Center Vaccination Clinic in East Boston, Massachusetts on February 16, 2021. (Photo by JOSEPH PREZIOSO/AFP via Getty Images)

President Joe Biden compared the campaign against COVID-19 to a wartime effort. Alongside the troop deployment, he also invoked a Cold War-era law called the Defense Production Act to help bolster manufacturing of vaccines, at-home COVID-19 testing kits and nitrile gloves used by health care workers and vaccinators. Referred to as the DPA, the law in essence allows the government to assign missions to private companies during national emergencies.

The pace of COVID-19 vaccinations in the U.S. has slowed in recent weeks, pushing Biden’s goal of having 70% of adult Americans receive their first dose by July 4 further out of reach. CDC data also shows the country is averaging fewer than 1 million shots per day. That’s far below April’s peak when the country was averaging more than 3 million shots a day.

One challenge with the vaccine rollout is vaccine hesitancy. A new Gallup poll showed that 78% of unvaccinated Americans say they don’t plan to ever get the shot.

Last week, Biden announced a "month of action" to urge more Americans to get vaccinated before the July 4 holiday, including an early summer sprint of incentives and a slew of new steps to ease barriers and make getting shots more appealing to those who haven’t received them.

Biden will also announce that he is assigning Vice President Kamala Harris to lead a "We Can Do This" vaccination tour to encourage shots. It will include first lady Jill Biden, second gentleman Doug Emhoff and Cabinet officials. Harris’ travel will be focused on the South, where vaccination rates are among the lowest in the country, while other officials will travel to areas of the Midwest that have below-average rates.