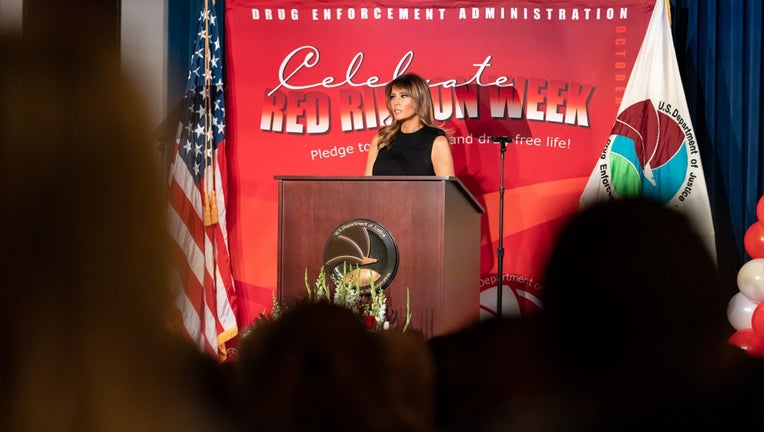 "Marketing this addictive product to children must stop," the first lady said at a rally to mark the start of "Red Ribbon Week."

ARLINGTON, Va. - Melania Trump said Monday that companies "must stop" marketing e-cigarettes to children, saying they are addictive and dangerous.

Marketing tobacco products to kids is already prohibited in the United States, and Juul Labs Inc., the nation's largest maker of electronic cigarettes, has said it will cease advertising them in the U.S.

Still, some believe Juul's early online marketing of e-cigarettes contributed to an explosion in vaping among youth.

Mrs. Trump said "it is important to me that we all work to educate children and families about the dangers associated with this habit."

"Marketing this addictive product to children must stop."

The first lady promotes an anti-drug message through the "Be Best" youth initiative she launched in May 2018.

She and the president have a 13-year-old son, Barron.

Last month, Mrs. Trump tweeted her concerns over the "growing epidemic of e-cigarette use in our children."

She later joined President Donald Trump when he announced from the Oval Office that U.S. health authorities will act to ban thousands of fruity and other flavorings used in e-cigarettes.

Federal statistics show vaping among teens had increased significantly between 2017 and 2018.

More than 1 in 4 high school students reported vaping in the past month, up from 1 in 5 students in 2018, according to the latest statistics.

Federal health officials have called the trend an "epidemic," and fear teenagers who vape will eventually start smoking.

The Food and Drug Administration is analyzing products from 18 states, but neither that agency nor the CDC has pinpointed an electronic cigarette, vaping device, liquid or ingredient as the root

Mrs. Trump said her visits to hospitals and rehabilitation centers have allowed her to see "the horrible results of drug abuse."

She pledged to "continue to address addiction as long as it affects our children, our youth and our schools."

The Campaign for Tobacco-Free Kids said it was grateful for the first lady's message and called on the administration to implement its plan and quickly remove all flavored e-cigarettes from the market.

"Flavors have been a key part of the industry's strategy for marketing to kids and have fueled this epidemic," said Vince Willmore, a spokesman for the advocacy group.

Juul has pledged not to lobby against the Trump administration's planned flavor ban.

Other industry representatives, such as the American Vaping Association, which represents makers and retailers of e-cigarettes and vaping solutions, oppose the planned policy.

Opponents argue the policy could create a "black market" for vaping products and push adults who vape to resume smoking.

Mrs. Trump addressed a rally at the U.S. Drug Enforcement Administration headquarters to mark the start of the annual "Red Ribbon Week" on Oct. 23, an observance that came to be after the 1985 torture and slaying of DEA Special Agent Enrique "Kiki" Camarena in Mexico.

Americans began wearing red ribbons to honor Camarena's sacrifice, and schools in the region of California where he lived formed clubs in his name and pledged to live drug-free lives.

Camarena's widow, Mika, attended the rally. Students seated in the auditorium rose and recited a pledge to stay away from drugs.

Most of those in the audience wore the event's "red ribbon" pin but the first lady did not wear one on her sleeveless black dress. Her office said she was not given a pin by DEA staff before entering the auditorium with acting administrator Uttam Dhillon.